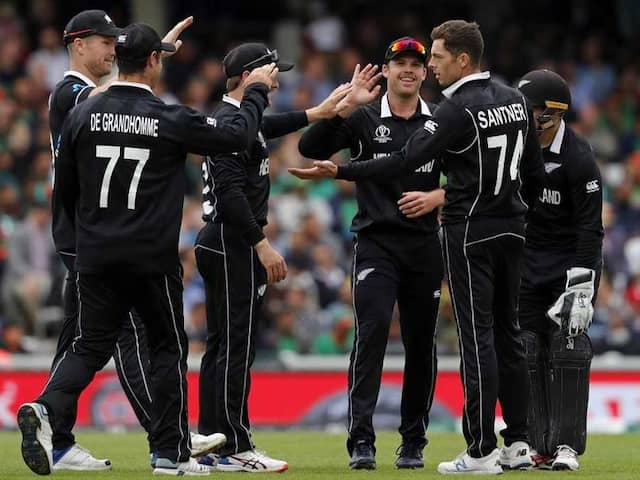 New Zealand top of the 10-team points table with three wins in as many games.© AFP

World Cup 2019 table-toppers New Zealand will be up against one of the favourites and third-placed India in their next World Cup outing. India and New Zealand are the only two unbeaten teams left in the tournament but that will all change on Thursday. New Zealand, ranked fourth in the world, are top of the 10-team points table with three wins in as many games while India have four points courtesy their two consecutive wins. India will go into the match as favourites and while former New Zealand captain Daniel Vettori believes that the game against India "is simply massive", but the result won't define New Zealand's World Cup.

New Zealand, runners-up at the 2015 World Cup, have beaten Sri Lanka, Bangladesh and Afghanistan in the round-robin phase to put themselves in pole position for a semi-final spot.

"Three wins from three is a major confidence boost for New Zealand but the next game against India is simply massive," Vettori wrote in a column for the International Cricket Council.

"You know that matches against India are going to have a great atmosphere and be a real pressure situation," he added.

"India are perhaps the best team in the world and it's exciting to play in front of a big-match crowd that is so into the game and so passionate about cricket."

Kohli's team beat defending champions Australia by 36 runs in front of thousands of India fans at the Oval on Sunday to make it two wins out of two.

Vettori said the New Zealand players would have to deal with vociferous backing for the Indian side at Trent Bridge on Thursday.

"Lots of the guys will have experienced that in the sub-continent but to have that in England is going to be something that's new to them and something they need to get used to as the tournament goes on, particularly if they want to reach those semi-finals," he said.

"Because they've performed so well for a long time, New Zealand won't be defined by the result or performance in this game, win or lose."

Pacemen Matt Henry, Lockie Ferguson and Trent Boult did the damage for New Zealand in their first two victories, against Sri Lanka and Bangladesh.

But all-rounder Jimmy Neesham turned out to be an unlikely hero against minnows Afghanistan, claiming five wickets.

"You can see New Zealand want to go with two all-rounders and they really back their batting, so these types of performances just give them another option for how they play their game," said Vettori.

Virat Kohli World Cup 2019 India vs New Zealand, Match 18 Cricket
Get the latest Cricket news, check out the India cricket schedule, Cricket live score . Like us on Facebook or follow us on Twitter for more sports updates. You can also download the NDTV Cricket app for Android or iOS.