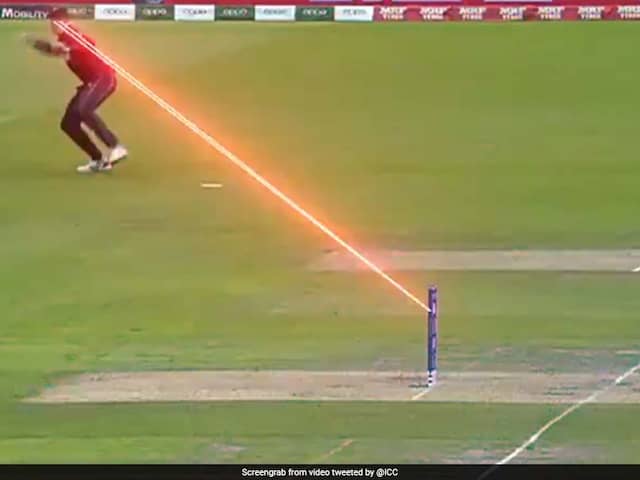 MS Dhoni lost his wicket after completing a half-century for India.© Twitter

MS Dhoni's run-out during the World Cup 2019 semi-final with New Zealand at Old Trafford on Wednesday was the turning point, with India potentially looking like getting really close to the target of 240 before the veteran was found short by a fine throw from Martin Guptill. Even as Indian fans were agonising over the loss, a video tweeted by the International Cricket Council (ICC), which was captioned "Hasta La Vista, Dhoni" didn't go down well with them at all as they thought it was in poor taste for the official organisers of the tournament to put up such stuff on social media.

Fans however did not take kindly to ICC taking inspiration from Arnold Schwarzenegger's famous "Hasta l vista, baby" dialogue from the Terminator series and took ICC to task.

@ICC don't give us repeatedly heartbreak plz. We can't bear it now. I have been crying for more 3-4 hrs....

Seems like @ICC is happiest now India is out

It was the third delivery of his over with MS Dhoni on the strike and Bhuveshwar Kumar at the other end when Dhoni gloved the ball towards short fine-leg. Having Bhuvneshwar on the other end, Dhoni wanted a strike and ran for the second run and was found just short of the crease.

Martin Guptill's throw was perfect and Dhoni, who mostly is a superb judge of a run, was for once left short.

Till then, with Dhoni and Ravindra Jadeja showing great poise, India were looking good to claw back to a win.

India were left 18 runs astray of New Zealand's total of 239 as the top order was blown away by Matt Henry and Trent Boult while the middle-order was outwitted by left-arm spinner Mitchell Santner.

MS Dhoni World Cup 2019 Cricket India vs New Zealand, 1st Semi Final
Get the latest updates on IPL 2020, check out the IPL Schedule for 2020 and Indian Premier League (IPL) Cricket live score . Like us on Facebook or follow us on Twitter for more sports updates. You can also download the NDTV Cricket app for Android or iOS.