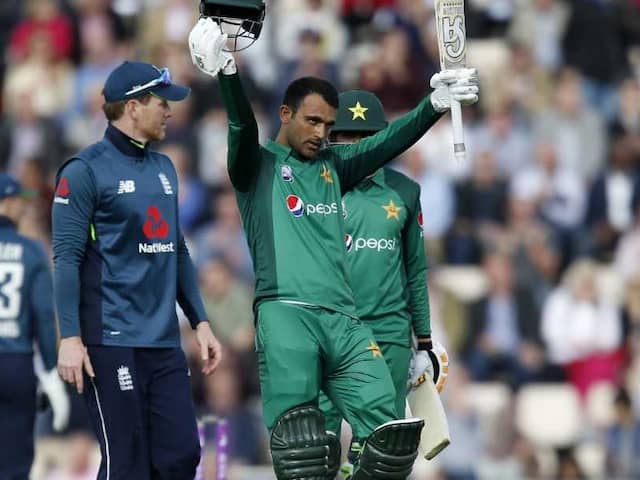 Fakhar Zaman scored a 84-ball century for Pakistan against England in the second One-Day International (ODI) at the Rose Bowl in Southampton on Saturday. Fakhar Zaman's ton, in Pakistan's final One-Day International (ODI) assignment ahead of the World Cup 2019, put the visitors in a strong position in the mammoth chase of 374 runs. It was the fourth ODI century for the Pakistan opener, first in the series, after the first match was abandoned due to rain. The 29-year-old, who has nine ODI half-centuries to his name will be the key for Pakistan in the quadrennial showpiece.

Buttler's 110 not out featured nine sixes, including a straight drive off Hasan Ali that took him to three figures.

Such was his command that Buttler's second fifty took him a mere 18 balls, with new father Buttler making a 'rocking the baby' gesture to celebrate bringing up a century that also included four fours.

An extraordinary 'inside out' six off Hasan over long-off was arguably the pick of his shots, although a pull off Shaheen Shah Afridi that cleared the rope and took him into the 90s was almost as impressive.

Together with England captain Eoin Morgan (71 not out) he shared an unbroken partnership of 162.

It was an encouraging display by the World Cup hosts just a few weeks from the start of the tournament and further proof of their progress as an ODI side.

Saturday's total was the 35th time since their miserable first-round exit at the 2015 World Cup that England, now top of the ODI rankings, had posted a total in excess of 300 -- a feat they had achieved only 34 times in total prior to that tournament.

A Pakistan attack missing the ill Mohammad Amir took a pounding, with Hasan conceding 81 runs from his maximum 10 overs and Afridi 80.

England Cricket Team World Cup 2019 Fakhar Zaman Cricket
Get the latest Cricket news, check out the India cricket schedule, Cricket live score . Like us on Facebook or follow us on Twitter for more sports updates. You can also download the NDTV Cricket app for Android or iOS.