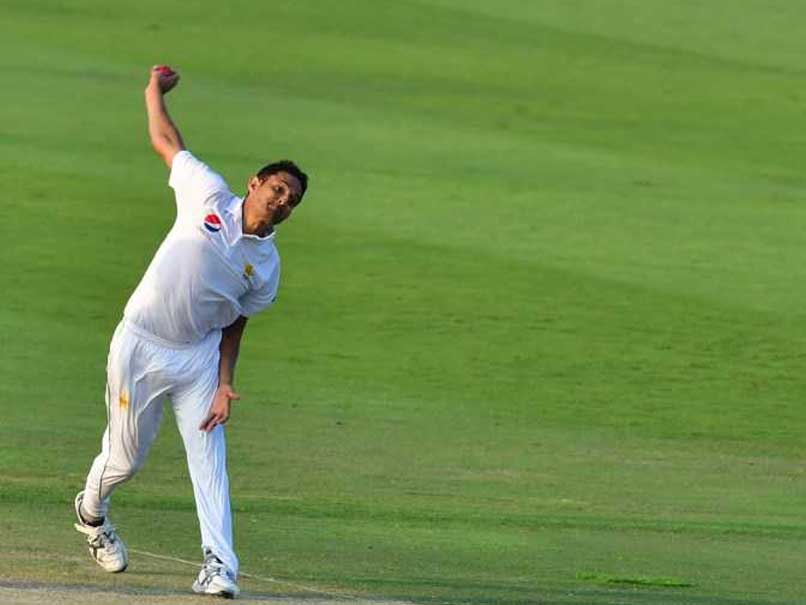 Medium pacer Mohammad Abbas registered a five-wicket haul to steer Pakistan into a dominating position in the second Test against Australia in Abu Dhabi on Wednesday. Abbas finished with five for 33 to bowl out Australia for a paltry 145 to give Pakistan a 137-run lead in the first innings on the second day at Sheikh Zayed Stadium. Pakistan stretched that lead to 281 as they were 144 for two at close, with Azhar Ali not out on 54 for his first half century in the series and Haris Sohail was 17 not out.

With eight wickets in hand Pakistan were in a great position to force a 1-0 lead in the two-match series after the first Test ended in a fighting draw in Dubai last week.

Azhar, who fell for disappointing scores of 18, four and 15 in the last three innings, batted with resolve, having so far hit three boundaries.

But it was once again debutant Fakhar Zaman who lifted Pakistan with a brilliant 66 following up his 94 in the first innings, before giving a return catch to Nathan Lyon who took an evasive action but still managed to hold onto the ball.

Zaman said Pakistan were in the driving seat.

"Yes, our position is good," said Zaman. "If we score 100-150 runs more on Thursday then with a turning wicket we have a very good chance of winning this Test."

Zaman said he was lucky to have played this Test.

"I was with the squad from the start but during the first Test I was about to return to Pakistan before, unfortunately, Imam-ul-Haq got injured and I got this chance of playing my first Test."

Mohammad Hafeez, who scored a hundred in the drawn first Test, fell to a lazy shot off pacer Mitchell Starc, caught at short mid-off for six.

Earlier, Abbas and spinner Bilal Asif (3-23) wrecked Australia for 145 in their innings.

Abbas had Shaun Marsh, in the fourth over of the day, for three and Travis Head for 14 before wrapping up the innings by trapping Starc leg-before for 34.

This becomes Abbas's third five-wicket haul in a burgeoning career of ten Tests.

Asif had removed Aaron Finch (39) and in the last over before lunch trapped Tim Paine leg-before for three.

Marnus Labuschagne offered some resistance during his 25 before falling to a freakish run out, backing up too far as a drive from Starc was deflected to the stumps by Yasir Shah with Labuschagne out of his crease.

Abbas, whose first wicket of the match made him the joint second fastest Pakistani to 50 wickets, gave Pakistan an early wicket in the fourth over of the day, removing Marsh with a catch in the slip.

He then had Head caught in the second slip to leave Australia at 56 for four.

Leg-spinner Yasir made it 75 for five with the wicket of Mitchell Marsh, caught close to the wicket for 13 before Australia lose two more to reach lunch at 91 for seven.

Afer the Tests both the teams will play a series of three Twenty20 international with the first in Abu Dhabi on October 24.

Yasir Shah Fakhar Zaman Cricket
Get the latest updates on IPL 2020, check out the IPL Schedule for 2020 and Indian Premier League (IPL) Cricket live score . Like us on Facebook or follow us on Twitter for more sports updates. You can also download the NDTV Cricket app for Android or iOS.