Eoin Morgan shattered Afghanistan with a brutal knock of 148 off just 71 balls. 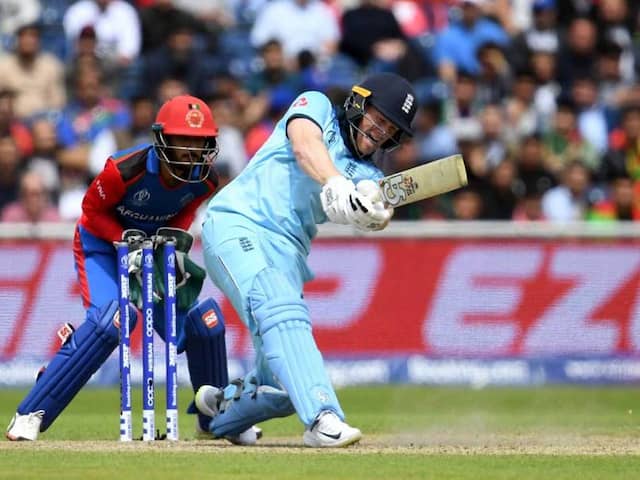 Eoin Morgan helped England put a massive score on the board with his blistering innings of 144.© AFP

England captain Eoin Morgan struck 17 huge sixes against Afghanistan as England put a mammoth first innings total of 397/6 against Afghanistan in their World Cup 2019 league contest. With this explosive innings Morgan went past the likes of Rohit Sharma, AB de Villiers and Chris Gayle in terms of most sixes in a One-day International (ODI) innings. Previously, the record for most number of sixes was jointly shared among Rohit, de Villiers and Gayle who all scored 16 sixes in an innings. Gayle had scored these many sixes in a World Cup game, against Zimbabwe at the Manuka Oval at Canberra in 2015.

Thanks to their flamboyant batting display, England also broke the record for most number of sixes by a team in an ODI match. Eoin Morgan's side beat the previous ODI record of 24 sixes which they set against the West Indies earlier this year.

After winning the toss, England skipper Eoin Morgan decided to bat first on a sunny day in Manchester and the openers gave the team a solid start after which Morgan and Joe Root took the innings forward. The 32-year-old made 148 off 71 deliveries.

Apart from Morgan, Jonny Bairstow and Joe Root also scored half-centuries as Afghanistan once again failed to deliver at the big stage.

For Afghanistan, Mujeeb Ur Rahman was the pick of the bowlers as he was the only survivor of the onslaught from the England batsmen.

Mujeeb conceded just 44 runs in his quota of 10 overs while every other Afghan bowler went for more than 6.8 runs per over.

During his innings of 148, Morgan took a liking to Afghanistan's star player Rashid Khan. Rashid went for more than 100 runs in just nine overs, registering figures of none for 110.

Afghanistan will have to bat out of their skins, if they want to have any chance of coming closer to this humongous total of England.

Eoin Morgan World Cup 2019 Cricket England vs Afghanistan, Match 24
Get the latest Cricket news, check out the India cricket schedule, Cricket live score . Like us on Facebook or follow us on Twitter for more sports updates. You can also download the NDTV Cricket app for Android or iOS.