England take on Pakistan in their second World Cup 2019 league match at Trent Bridge on Monday. 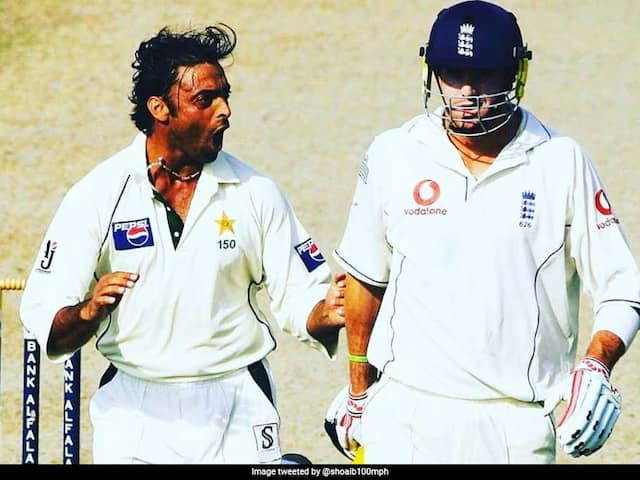 Shoaib Akhtar used the image of him celebrating Kevin Pietersen's wicket in his tweet for Pakistan team.© Twitter/Shoaib Akhtar

England vs Pakistan will be a highly-anticipated World Cup 2019 clash with the match holding special significance for the latter after their drubbing at the hands of the West Indies. While hosts England comfortably won their opening match against South Africa, Pakistan were completely embarrassed by a rampant West Indies team. Pakistan will have a chance to get their World Cup campaign back on track when they lock horns against England on Monday. Ahead of the clash, Shoaib Akhtar took to Twitter to post a motivational message for the Pakistan team, but little did he know that Kevin Pietersen had his eye on the image used for the tweet.

In the picture used by Shoaib Akhtar, the former Pakistan pacer is seen celebrating after taking a wicket, with the batsman in question being England star Kevin Pietersen.

"Blood, sweat, aggression, racing heartbeat, badmaashi. This is whats required when you represent your country. This star on your chest is your pride guys. Tagra khelo. Go get them. Larr jao. #Pakistan #PakvsEng #cwc2019," Shoaib Akhtar captioned the image.

Blood, sweat, aggression, racing heartbeat, badmaashi. This is whats required when you represent your country. This star on your chest is your pride guys. Tagra khelo.
Go get them. Larr jao. #Pakistan #PakvsEng #cwc2019 pic.twitter.com/b9JnTmBKOp

However, Kevin Pietersen came up with a hilarious reply to the tweet that would count as one most brutal trolls between former cricketers.

Can't argue with that tweet buddy as you're celebrating after I smacked you all over for a 100...! Great passion!

The banter didn't end there as Shoaib Akhtar, despite acknowledging Pietersen's talent, reminded him of the chicken dance he did after dismissing the Englishman.

Mate you were a true force to reckon with but loved my chicken dance after getting u out ..

The back and forth continued -- all in good spirits of course -- with the banter finally ending with both players confessing their love for one another.

In their opening game, hostile fast bowling by the West Indies saw Pakistan slump to just 105 -- their second-lowest World Cup total -- in a mere 21.4 overs at Trent Bridge.

The West Indies, two-time former champions, then polished off the meagre target in 13.4 overs on the back of dashing opener Chris Gayle's 34-ball 50 which included six fours and three sixes.

Monday's clash against England could see another trial by pace with Mark Wood expected to come into the playing XI to dish out the short-pitch treatment and add to that the pace of Jofra Archer, and Pakistan batsmen could be in for a torrid time at Trent Bridge.

Kevin Pietersen World Cup 2019 England vs Pakistan, Match 6 Cricket
Get the latest Cricket news, check out the India cricket schedule, Cricket live score . Like us on Facebook or follow us on Twitter for more sports updates. You can also download the NDTV Cricket app for Android or iOS.