Joe Root called on his England teammates to remain calm and carry on after a surprise 14-run defeat by Pakistan. 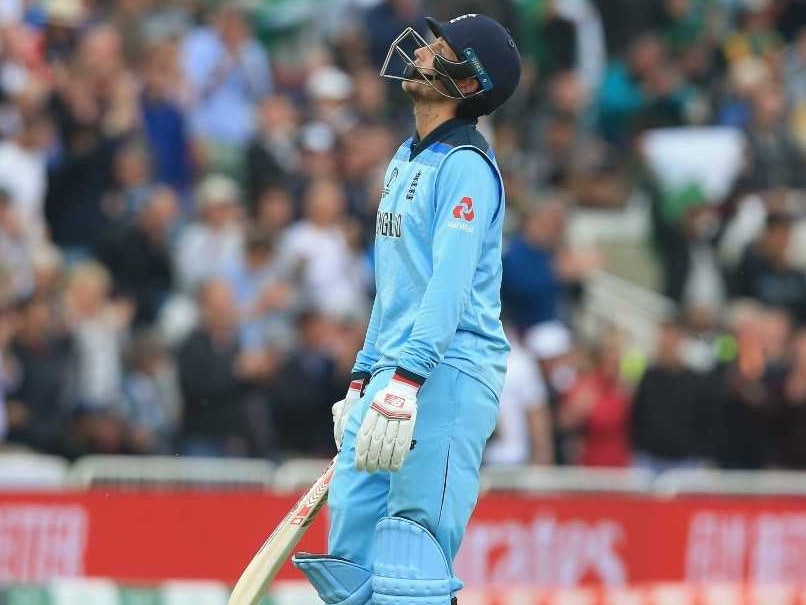 Joe Root ended up on the losing side despite scoring an impressive hundred against Pakistan.© AFP

After suffering a shock loss to Pakistan at Trent Bridge on Monday, England star batsman Joe Root called for calm, urging teammates to go with the flow. Joe Root urged his teammates not to repeat mistakes committed in the hosts' first loss in World Cup 2019. England, the tournament favourites, went into the Pakistan match in good form, having easily defeated South Africa in the World Cup opener. But things didn't go to plan for Eoin Morgan's men as a poor day in the field cost them dear. Dropped chances, juxtaposed with undisciplined bowling helped Pakistan banish the ghosts of the West Indies loss as they registered a 300-plus score. Despite centuries from Joe Root and Jos Buttler in the chase, England fell short by 14 runs.

Root now expects England, the world's top-ranked ODI side, to bounce back strongly against Bangladesh in Cardiff on Saturday.

"The most important thing now for us as a group is not to panic," he told reporters.

"We know what works for us as a formula, and as a team, but other sides are allowed to play well and we've got to make sure we learn quickly and bounce back at Cardiff.

"The temptation is to get a little bit tense, but one of our great strengths as a side is sticking to the way we go about things and be as smart as possible.

"And the beauty of this format is I do believe the best four teams over the tournament will qualify for the semi-finals and we've got to make sure we play some good cricket in our remaining games."

The Test captain insisted: "One thing this side doesn't do very often is to make the same mistake twice and I'm sure the guys will make sure it's a very different performance against Bangladesh."

Pakistan's 348 for eight -- in marked contrast to a total of 105 all against the West Indies in their tournament opener -- left England needing a new record for the highest successful World Cup run-chaseif they were to win on Monday.

England, however, were ultimately made to pay for an unusually sloppy display in the field.

Mohammad Hafeez was dropped by Jason Roy on 14 -- a sitter of a chance at mid-off -- before top-scoring for Pakistan with 84 while England gave away runs with several overthrows and misfields.

It was all so different from England's fine fielding effort during a 104-run thrashing of South Africa in last week's first match of this World Cup.

"It was just a really bad day in the field," said England captain Eoin Morgan.

"There were mistakes that we don't normally make. And that's disappointing.

"We've gone from probably one of our best performances in the field at the Oval to, not extremely bad, but it's cost us probably 15-20 runs in the field which is a lot in the one-day game."

The umpires warned both Morgan and Pakistan counterpart Sarfaraz Ahmed about deliberately throwing the ball in on the bounce -- a tactic that is used to scuff the ball up in a bid to generate reverse swing.

Buttler also appeared to look long and hard at the ball after his dismissal.

"There were discussions throughout the whole of the two innings," said Morgan.

"The umpires came to me mid-innings and seemed to think that we were throwing the ball in on the bounce too much or it was being over-exaggerated.

"They emphasised it would be the same for both (teams).

"The conversations that were stopping the game were that Pakistan were doing the same thing," he explained.

The Dubliner added: "Jos was just intrigued to see the ball. When the ball is hit against the LED boards (on the boundary) it does scuff it up quite a lot, so he was just interested to see if the ball was more scuffed up."

Sarfaraz Ahmed World Cup 2019 England vs Pakistan, Match 6 Cricket
Get the latest updates on India vs South Africa and check out  Schedule, Results and Live Score. Like us on Facebook or follow us on Twitter for more sports updates. You can also download the NDTV Cricket app for Android or iOS.