Steve Smith and David Warner received their 1st call up to the Australia squad since the expiry late last month of year-long bans for their part in the ball-tampering scandal. 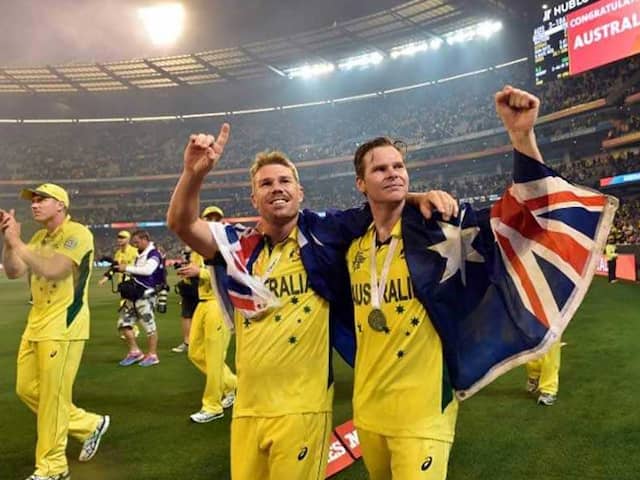 Steve Smith and David Warner returned to the national team as Australia revealed their 15-member squad for World Cup 2019 to be held in England and Wales. However, there were a few surprise omissions as fast bowler Josh Hazlewood and in-form batsman Peter Handscomb were both overlooked. Left-handers Usman Khawaja and Shaun Marsh have been rewarded for their good recent form by being included in the Australia World Cup squad, while Aaron Finch will continue to lead the team that also includes star all-rounders Marcus Stoinis and Glenn Maxwell.

It is the first call-up for the former captain and his deputy since the expiry late last month of year-long bans for their part in the ball-tampering scandal in Cape Town that rocked cricket.

They were eligible for the final two games of Australia's recent limited-overs tour against Pakistan, but selectors preferred that they eased themselves back at the IPL 2019.

Both grabbed the opportunity and have been in good touch, particularly the bombastic Warner who has made a blistering return.

It left coach Justin Langer with a dilemma on the back of the defending World Cup champions winning eight one-day internationals on the trot, against India and Pakistan.

All the top order have been firing, and it is Handscomb who is the fall guy despite averaging 43 in 13 games this year. The decision to drop him means the team only has one wicketkeeper in Alex Carey.

"We have been extremely pleased with how the ODI squad has been building over the past six months, including the recent series wins in India and against Pakistan in the UAE," said chief selector Trevor Hohns.

"Steve Smith and David Warner come back into the squad. Both are world-class players and it has been pleasing to see them produce some good form in the IPL."

Australia's recent red-hot form has been built on the back of a rock-solid opening partnership between skipper Aaron Finch and Usman Khawaja.

The decision for Langer now is whether to retain that combination when the 50-over World Cup begins in England and Wales at the end of next month or move one of them down to make way for Warner, who traditionally opens the batting.

As with the batsmen, Australia's selectors faced a bowling conundrum as they target a record sixth World Cup triumph.

Pat Cummins will spearhead the attack while Mitchell Starc, the 2015 World Cup player of the tournament, has been recalled after being sidelined with a muscle tear since early February.

But Hazlewood, who has been out of action since January with a back injury, missed out, with Hohns saying the focus was on having him ready for the Ashes Test series in England which begins in August.

Jhye Richardson, who dislocated his shoulder last month, makes the grade along with Nathan Coulter-Nile and Jason Behrendorff.

Hazlewood and Handscomb were instead named in Australia's A squad for their tour of England starting in June, which will provide opportunities for players to make their case to be included in the Ashes squad.

"Given the depth of talent and competition for spots there were a number of tough calls we had to make to settle on our squad of 15," said Hohns.

"Unfortunately, from the recent squad which toured India and the UAE, Peter Handscomb, Ashton Turner and Kane Richardson have made way for the above inclusions, but all three have been included in the Australia A squad for the tour of England."

Josh Hazlewood Peter Handscomb World Cup 2019 Cricket
Get the latest Cricket news, check out the India cricket schedule, Cricket live score . Like us on Facebook or follow us on Twitter for more sports updates. You can also download the NDTV Cricket app for Android or iOS.