Thailand were impressive in scoring 150/3, their highest ever, against Pakistan in their last group match but had to share points after the match was called off due to rain. 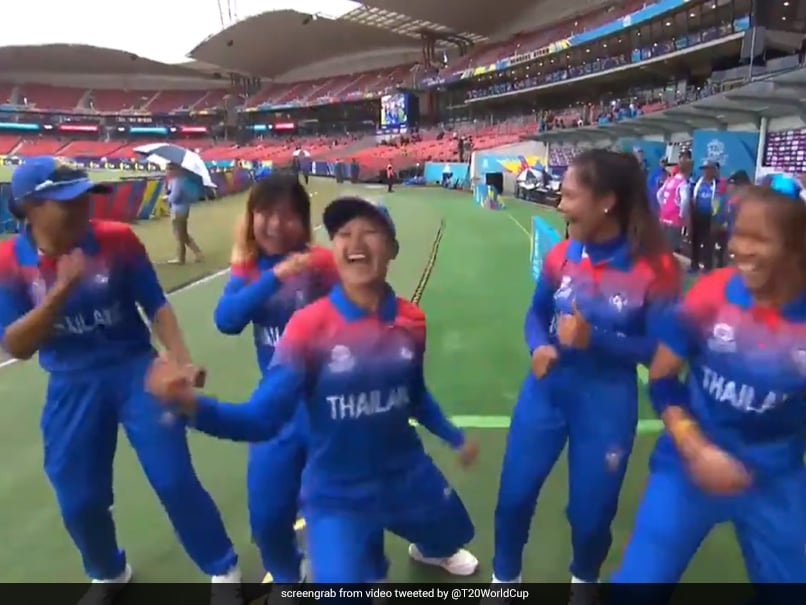 Thailand players were dancing to the tunes of Vengaboys' "We Like to Party".© AFP

The Thailand women's team scored 150/3 in 20 overs, their highest-ever T20 International total in a Women's T20 World Cup Group B match against Pakistan in Sydney on Tuesday. However, the teams had to share points as the match was called off due to rain. Besides being impressive with their batting skills, some of the Thailand women cricketers delighted the fans with an impromptu dance during a rain break. "During the rain delay, Thailand kept the fans entertained on the big screen with an impromptu dance-off. Thank you for being part of #TheBigDance!" the International Cricket Council captioned the video on Twitter.

During the rain delay, Thailand kept the fans entertained on the big screen with an impromptu dance-off

The Thailand players were dancing to the tunes of Vengaboys' "We Like to Party".

Afghanistan star spinner Rashid Khan was quick to reply on the ICC's tweet, calling himself a "fan of Thailand team now".

Qualifiers Thailand had lost all three of their previous games in their first appearance at the tournament, with a highest total of 82.

But, after winning the toss at Sydney Showground, they stunned Pakistan with their aggressive batting approach, racing to 150 for three off 20 overs.

Pakistan, who upset 2016 champions West Indies in their opening game before losing the next two, would have needed their record run chase to win but the game was abandoned before they could face a ball, and the points shared.

Chantam made 56 with some late big hitting from Nannapat Khoncharoenkai and Chanida Sutthiruang ensuring Thailand passed their previous record of 133 for eight recorded against the Netherlands last year.

Thailand Women Rashid Khan Cricket Pakistan Women vs Thailand Women, Match 19 Women's T20 World Cup
Get the latest updates on Fifa Worldcup 2022 and check out  Fifa World Cup Schedule, Stats and Live Cricket Score. Like us on Facebook or follow us on Twitter for more sports updates. You can also download the NDTV Cricket app for Android or iOS.