It will be Novak Djokovic and Nick Kyrgios who will square off against each other in the finals of Wimbledon, however, nobody could have expected that ahead of the summit clash, a bromance would start brewing between these two. Djokovic and Kyrgios' history goes a long way back but it seems these two have buried the hatchet. The two stars engaged in a fun banter on Instagram and it looks like both of them would be heading for a dinner after the final, with the winner paying the bill.

It all started with Kyrgios re-posting a tweet on his Instagram story about the improved relationship between the two, and he asked Djokovic, if they were "friends now".

Djokovic then replied on Instagram story, saying: "If you are inviting me for a drink or dinner, I accept. PS winner of tomorrow pays.”

Kyrgios did not stop there and he took the banter ahead, saying: "Deal, let's go to a nightclub and go nuts.” 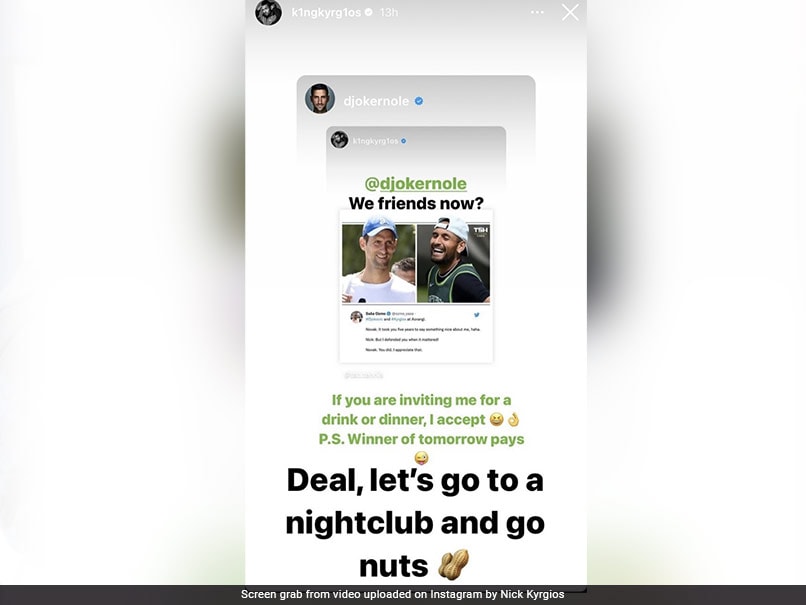 These social media posts have now gone viral on social media with fans appreciating the camaraderie between the two ahead of the all-important final.

It is important to note that Kyrgios was the one who criticised Djokovic openly in 2019 but then he was also the first to come in support of Djokovic after Australia decided to deport the star due to his COVID-19 vaccination status.

Talking about Wimbledon final, this will be Kyrgios first final appearance in a Grand Slam while Djokovic looks to win his 21st Grand Slam title.

Novak Djokovic Wimbledon 2022 Tennis
Get the latest updates on Fifa Worldcup 2022 and check out  Fifa World Cup Schedule, Stats and Live Cricket Score. Like us on Facebook or follow us on Twitter for more sports updates. You can also download the NDTV Cricket app for Android or iOS.