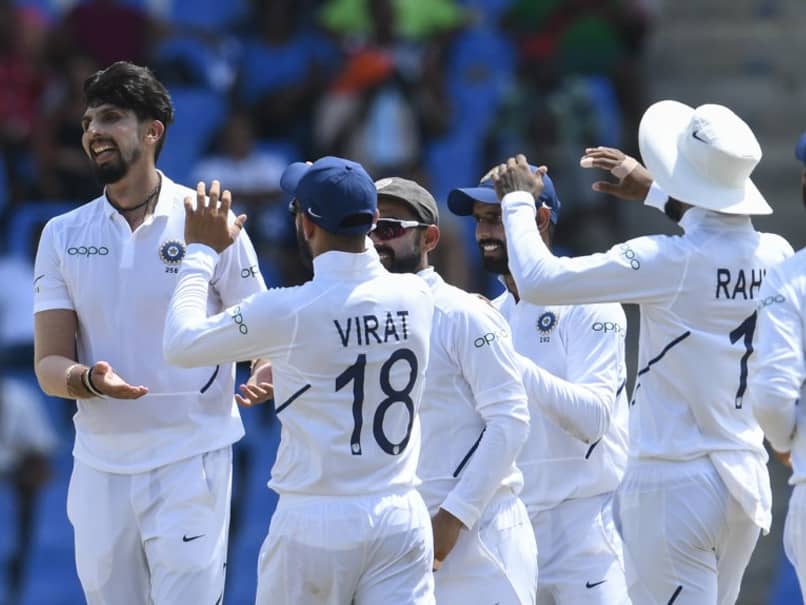 Ishant Sharma picked up his ninth five-wicket haul as India ended day two on a high against the West Indies in Antigua on Friday. The West Indies managed to post 189 for eight at stumps, trail India by 108 runs. With the bat, Roston Chase top scored for the home side with 48 runs. For India, apart from Ishant, Jasprit Bumrah, Ravindra Jadeja and Mohammed Shami picked up a wicket each to put India on top in the match. Earlier, Ravindra Jadeja scored his 11th Test fifty as India were bowled out for 297 on the second day of the first Test in Antigua on Friday. India lost Rishabh Pant early on day two but Ishant Sharma stood his ground and stitched together a 60-run stand that helped India post a competitive first innings total on the board. Earlier, Ajinkya Rahane's 18th half-century anchored India's revival to 203 for six on the opening day of the first Test against the West Indies at the Sir Vivian Richards Stadium in Antigua on Thursday. Reduced to 25 for three by opening bowlers Kemar Roach and Shannon Gabriel after they were put in to bat, Rahane underlined his immense value to a star-studded team with a gritty top score of 81 that helped lift the tourists to a more competitive position by the end of a rain-interrupted day. He received resolute support from opening batsman K.L. Rahul (44) in a fourth-wicket stand of 68 and then featured in an even more productive partnership with Hanuma Vihari (32), the pair putting on 82 for the fifth wicket. (SCORECARD)

West Indies Cricket Team West Indies vs India 2019 Live Score Live Cricket Score Live Blogs Cricket
Get the latest updates on IPL 2020, check out the IPL Schedule for 2020 and Indian Premier League (IPL) Cricket live score . Like us on Facebook or follow us on Twitter for more sports updates. You can also download the NDTV Cricket app for Android or iOS.