India overcame a bad start to post 251 for four on a slowish surface, largely due to the efforts of MS Dhoni, Kedar Jadhav and Ajinkya Rahane. 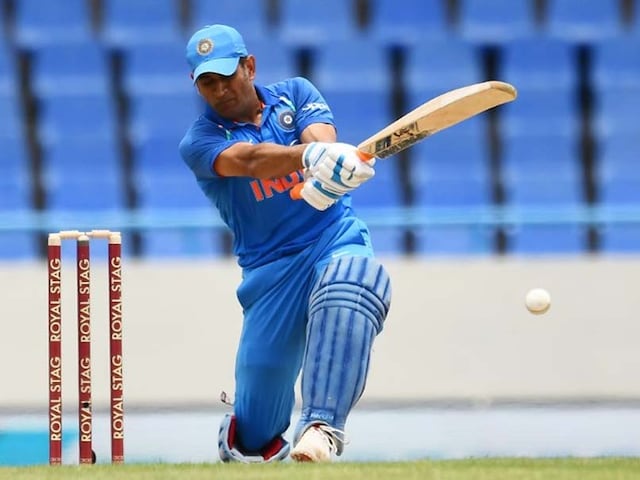 MS Dhoni in action in the third ODI against the West Indies.© AFP

In recent times, inconsistency might have crept in to his batting but former India captain Mahendra Singh Dhoni believes that he is like a vintage wine that only gets better with the passing of time. His unbeaten 78 off 79 balls enabled India to post a winning score on a tough batting track against the West Indies in the third ODI at Antigua. With the Indian top three in mouthwatering form in recent matches, the lower middle-order has had minimal chances to spend some time at the crease and the former skipper said that he is happy that he got a chance to play an innings of quality.

The visitors went on to beat the West Indies by 93 runs in the third ODI at the Sir Vivian Richards stadium.

In the post-match conference, Dhoni was asked how is he becoming with age. His reply was swift and crisp: "It's like wine".

"Our top-order has been doing the bulk of the scoring in the last one-one and a half years, so it felt good to get an opportunity and score runs."

"I think it was the nature of the wicket (what made the knock special). There was variable bounce and at times the pace. It was important to have a partnership at that stage. In my mind, I had 250, and we got there, with Kedar batting with me at the end. It was something the bowlers could defend, but they had to bowl well."

Dhoni was very vocal behind the stumps, giving instructions to spinners (Kuldeep Yadav and R Ashwin), most of which was picked up by the stump mic.

"It's important (to guide spinners). Kuldeep has played a lot of games in IPL but when it comes to international cricket, it's important to know where to use your variety. Once he plays 5-10 games, he will realise it himself. The good thing is, compared to the last game, he bowled very well today."

India now lead the series 2-0 after the series opener was washed out. The fourth ODI will also take place at the Sir Vivian Richards Stadium in Antigua on Sunday.