Indians at US Open: Sania, Paes, Bopanna and Divij advance in doubles

Rohan Bopanna and his French partner Edouard Roger-Vasselin, who are seeded sixth, got the better of Russians Nikolay Davydenko and Mikhail Elgin. Fourth seeds Leander Paes and his Czech partner Radek Stepanek also endured a tough match before rallying to beat the unseeded German-Austrian duo of Daniel Brands and Philipp Oswald 4-6 6-3 6-4. 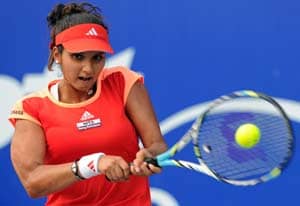 After a day to forget for the Indians at the US Open 2013 with Somdev Devvarman, Mahesh Bhupathi making early exits while mixed doubles also saw India's challenge come to an end, it was sort of a 'clean sweep' on Saturday.

10th seeds Sania Mirza and partner Zheng Jie of China had a comfortable entry into pre-quarterfinals with a 6-3, 7-5 win over Hungarian Katalin Marosi and USA's Megan Moulton-Levy. They will now face a tough challenge in battle for quarter-final spot against 6th seeds Anna-Lena Groenefeld of Germany and Kveta Peschke of Czech Republic.

In the men's doubles competition, it turned out to be an excellent day for all the Indians in fray.

First up was Divij Sharan with his Chinese-Taipei partner Yen-Hsun Lu. The duo defeated the Israeli team of Jonathan Erlich and Andy Ram 6-4 5-7 7-6 (2) in a hard-fought contest.

They have a tough match on hand as next up for them is Pakistan's Aisam-ul-Haq Qureshi and the Netherlands Jean-Julien Rojer, a combination that is seeded fifth in the season's final Grand Slam.

Paes and Stepanek will square off against 14th-seeded Frech combine of Michael Llodra and Nicolas Mahut in their third-round match.

Elsewhere, Rohan Bopanna and his French partner Edouard Roger-Vasselin, who are seeded sixth, got the better of Russians Nikolay Davydenko and Mikhail Elgin 7-6 (2) 7-6 (0) in another evenly-contested match.

Bopanna and Edouard's next opponents are 12th seeded Colin Fleming and Jonathan Marray of Britain.