Nadal acknowledged there was something special about his latest trophy because he watched last year's US Open on TV from the sofa back home in Spain, sidelined by a left knee injury that forced him off the tour for about seven months. 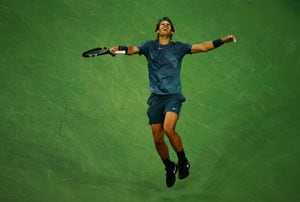 Rafael Nadal was not quite ready to contemplate his place in tennis history.

It had been less than two hours since a gripping victory over Novak Djokovic earned Nadal his second U.S. Open championship and 13th Grand Slam title overall.

So when a question came about the likelihood of catching up to the only men who have won more major trophies - Roger Federer has 17, Pete Sampras has 14 - Nadal simply smiled and replied: "Let me enjoy today."

As it is, the 27-year-old Nadal added, his Grand Slam collection is "much more than what I ever thought ... ever dreamed."

Still, even Nadal acknowledged there was something special about his latest trophy, achieved by beating No. 1-ranked Djokovic on the most important of their rollicking points that lasted 15, 25, even more than 50 strokes. Withstanding Djokovic's similar hustle-to-every-ball style, Nadal eventually pulled away to win their taut final at Flushing Meadows 6-2, 3-6, 6-4, 6-1 on Monday.

That's because he watched last year's U.S. Open on TV from the sofa back home in Spain, sidelined by a left knee injury that forced him off the tour for about seven months.

Nadal knew he'd return to tennis. Less clear was whether he would ever return to an elite level. (Match in pics)

It turns out, he might just be better than ever.

And when the last point was done on Monday, Nadal fell on his back, then rolled over onto his stomach and buried his face in his arms. The tears started flowing.

"It's normal that I was crying. I came from a not-easy situation, a tough one," Nadal said. "All the things ... happening to me are a surprise and are the result (of) the tough work after the low moments. So that makes the victories more emotional."

Earlier in his career, Nadal's prowess at the French Open and other tournaments played on slow, red clay earned him the moniker King of Clay. His first four major titles came in Paris.

But by tinkering with his game and constantly seeking to improve, he has become a master of every surface. He's one of seven men with a career Grand Slam: In addition to his record eight French Open championships, he has two from the U.S. Open's hard courts, one from the Australian Open's hard courts, and two from Wimbledon's grass courts.

By adding two major titles this season, at Roland Garros and Flushing Meadows, Nadal became the first man with at least one in nine consecutive years.

Even Federer did not do that.

"I mean, whatever he achieved so far in his career is something that everybody should respect, no question about it," Djokovic said about Nadal.

"He's definitely one of the best tennis players ever to play the game, I mean, looking at his achievements and his age, at this moment," continued Djokovic, a six-time major champion. "He still has a lot of years to play."

Nadal is 60-3 in 2013 with 10 titles and two runner-up finishes. The only tournament where he didn't reach the final was Wimbledon, where he lost to 135th-ranked Steve Darcis in the first round.

Rebounding from that shocking setback, Nadal has gone unbeaten since, raising his record on hard courts to 22-0 this year.

"What he is doing on hard courts is unbelievable for us," said Toni Nadal, Rafael's uncle and coach.

Not bad for a guy people used to think could not succeed on that speedy surface because of its wear and tear on his body. He plays more aggressively now, moving closer to - or even inside - the baseline and looking to end points sooner when possible.

It didn't always happen that way against Djokovic, however.

They started in sunlight and finished at night, a 3-hour, 21-minute miniseries of cliffhangers and plot twists with a pair of protagonists who inspired standing ovations in the middle of games.

"It's what we do when we play against each other, always pushing each other to the limit," Djokovic said.

This was their 37th match, the most between any two men in the Open era, and Nadal has won 22. It also was their third head-to-head U.S. Open final in the last four years. Nadal beat Djokovic for the 2010 title, and Djokovic won their 2011 rematch.

What might have been most impressive about Nadal this time was the way he stayed steady when Djokovic recovered from a rough start and began asserting himself.

Nadal was broken once through his first six matches in the tournament - a string that reached 88 games by early in the final's second set. But with Djokovic gaining control of more of the many extended exchanges, he broke Nadal three times in a row.

The final momentum shift back to Nadal came when he served at 4-all in the third set. Djokovic earned three break points, thanks in part to a tremendous lob-volley and another point when Nadal slipped and tumbled to his backside.

But a quick forehand winner by Nadal, a forehand into the net by Djokovic on a 22-stroke point, and a 125 mph (202 kph) ace - Nadal's only one of the evening, it drew shouts of "Vamos!" from Uncle Toni - helped avoid another break.

In the very next game, Nadal broke Djokovic's serve and, apparently, his will. When that set ended with Djokovic pushing a forehand long on a 19-shot point, Nadal screamed as he knelt down at the baseline, his racket on the court and his left fist pumping over and over and over.

"Thirteen," Nadal would say later of his Grand Slams, "is an amazing number."

Comments
Topics mentioned in this article
Tennis Rafael Nadal Andy Murray Novak Djokovic Bernard Tomic David Ferrer Stanislas Wawrinka Roger Federer US Open 2013
Get the latest updates on Fifa Worldcup 2022 and check out  Fifa World Cup Schedule, Stats and Live Cricket Score. Like us on Facebook or follow us on Twitter for more sports updates. You can also download the NDTV Cricket app for Android or iOS.