After injury and illness, a surprisingly triumphant season for Nadal

Since returning from an long injury lay-off, Rafael Nadal has won 10 titles, including his eighth French Open and his second US Open. 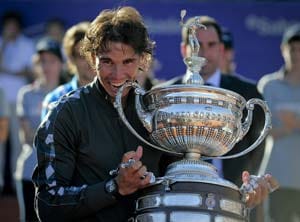 It is strange but true that a man who missed the year's first Grand Slam tournament, the Australian Open, and lost in the first round at Wimbledon is having one of the finest seasons in history.

Of course, Rafael Nadal has long been strange but true. He was a boy who threw with his right hand but learned to play tennis with dazzling skill with his left. He grew into a man whose biggest weapon is a bolo whip of a forehand that some have tried to copy but none have been able to duplicate. He remains a champion who competes as if prepared to grind his opponents into the surface of the court and then turns meek once the final point is secured. (Also read: Rafael Nadal just wants to enjoy his day after winning US Open title)

It has long been difficult to believe him, truly believe him, when he strikes a submissive pose before or after a match. But it is easy to believe him when he says he never imagined a season like this after missing six months with chronic left knee problems and another month and the Australian Open because of a stomach virus.

Since returning, he has won 10 titles, including his eighth French Open and his second U.S. Open. His 2013 match record is 60-3 as he prepares to change surfaces (and continents) in a hurry to play for the Spanish Davis Cup team in Madrid on clay in this week's World Group qualifying round match against Ukraine.

"Looking back, all this is a bonus, because I've done much more than I would have expected seven months ago," Nadal said in Spanish late Monday night after beating Novak Djokovic to win the U.S. Open. "But obviously you can't maintain this level. You can't do it; can't play - how many? - 13 tournaments, make 12 finals, win 10 titles. Five Masters 1000s, two Open 500s, two Grand Slams. This doesn't exist.

"You just can't keep this up in moments that are complicated and keep winning and winning, because no one can resist this," he said. "It's logical, but that doesn't mean you lose the motivation to keep fighting and to keep doing what I've always been passionate about: competing and competing at the highest level. I'll try to keep on the same path. Things are surely not going to go as well as this, but I hope to be here for many years."

That remains uncertain in light of his hard-charging style and history of knee trouble. But he is clearly in a much more brightly lit place than he was last September when Andy Murray beat Djokovic to win the 2012 U.S. Open with Nadal out of commission and with no clear return date. (Match in pics)

After years of on-and-off knee problems and treatment, including platelet-rich injections, he had run into more pain than he could handle. He was eventually diagnosed with a tear in the left patellar tendon and, in the same knee, chronic inflammation in the fatty pad.

Nadal's astonishingly complete resurgence comes in an era when great achievement in sports routinely generates doubts and in an era when tennis' anti-doping efforts have generated external criticism for not being as aggressive or exhaustive as in other sports. It also comes at a time when Viktor Troicki, a former top 20 player, has been banned for 18 months refusing to submit to a blood test, a ban he is contesting in the Court of Arbitration for Sport.

Though Nadal complained earlier in his career about the invasiveness of the whereabouts program, which requires athletes to be available once a day year-round for unannounced testing, he has openly called for more such testing this year and also more transparency. He has lobbied for the International Tennis Federation, which oversees the program, to release testing information and results more regularly and promptly.

"I'm not sure there's anything that can be done about it," said ESPN analyst Patrick McEnroe, a former U.S. Davis Cup captain, of the doubts surrounding sports achievement. "Obviously, you go through the Lance Armstrong story, and the guy was tested more than anyone else and lo and behold he was doing everything. It's hard to say there's a clear answer other than to say the players are getting tested, getting blood-tested."

McEnroe, who runs the U.S. Tennis Association's player development program, said he was comfortable that Nadal is clean.
"I think he's a freak of nature," McEnroe said. "I've seen videos of him when he was 13 or 14 and he had the same kind of energy and attitude; the way he played then. That was the way he was and when you talk to people who have gone to Majorca, and to Juan Monaco and different guys like that who have gone to train with him, he literally goes from playing four hours of tennis and then goes to play an hour or two hours of soccer. So clearly he's got this incredible energy and this incredible athleticism and amazing desire."

With a 22-0 record on hardcourts this year, Nadal, not Djokovic, is now the world's best hardcourt player - positioning himself closer to the baseline, going for more with his forehand and using his still-underrated versatility (see Monday night's backhand slices and one-handed backhand winners in extension).

Surprisingly, in light of his court coverage, Nadal said he was not pain-free.

"I never felt 100 percent in my recovery on my knee," he said. "Because lots of days it still bothers me, the knee, but that does not mean it affects my game because I'm playing with no limitation. So that's the most important thing.

"Whatever happens from here, this is one of the best years of my career."

And perhaps the most gratifying of all because he truly (truly) did not see it coming.

Comments
Topics mentioned in this article
Tennis US Open 2013 Bernard Tomic Novak Djokovic Rafael Nadal Andy Murray Roger Federer Stanislas Wawrinka David Ferrer
Get the latest updates on Fifa Worldcup 2022 and check out  Fifa World Cup Schedule, Stats and Live Cricket Score. Like us on Facebook or follow us on Twitter for more sports updates. You can also download the NDTV Cricket app for Android or iOS.