A tired Rafael Nadal is ready for Davis Cup duty

Over the coming three days, Spain play Ukraine in the Davis Cup in Madrid's Caja Magica looking to ensure their continuation in the World Group after a surprising first round exit to Canada in February. 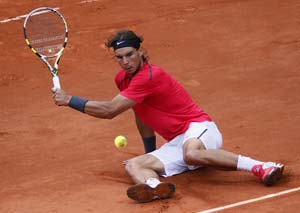 Recently crowned US Open champion Rafael Nadal has arrived here to help Spain make sure of their presence in the world tennis elite.

Over the coming three days, Spain play Ukraine in the Davis Cup in Madrid's Caja Magica looking to ensure their continuation in the World Group after a surprising first round exit to Canada in February.

Nadal was not part of that defeat as he put the finishing touches to his recovery from the long term knee injury which had sidelined him since his second round exit in Wimbledon 2012.

Now fully recovered and in top form, the Spaniard has finished the celebrations and obligations following on from his four-set win over Novak Djokovic in the US Open final Monday. He was back in Madrid to get in some practice on the beaten clay surface on which the tie will be played on.

Nadal has already triumphed in Madrid this year, winning the Masters 1000 series event and despite the obvious effects of playing in the US Open and jetlag, he is looking forward to playing.

"I have had a change of time zone after two weeks of playing at high intensity and the big thing was for me to keep on moving and to try and get the right feeling back," he said, adding that he was willing to play singles if needed.

"The captain (Alex Corretja) will decide that, it is not for me to say anything, because if I do then that will put him in a compromising position," said Nadal.

The rest of the team consists of Tommy Robredo and Fernando Verdasco, along with Marc Lopez. Lopez will play doubles, but Corretja could decide to rest Nadal in the singles rubbers Friday and include him in Saturday's doubles and possibly Sunday's singles if needed.

Nadal admits he is in fine form, but tired after the demands of three consecutive triumphs in the US Open, Cincinnati and Montreal.

"After winning three consecutive tournaments, it's impossible to have better feelings, but it is not a lot of time coming after a big effort. However, I am willing to do everything possible to help the team. If I play on Friday, then its Friday, if its Saturday, then its Saturday and if not then I will do my best to help on Sunday. I am here and that means I am here to try and play," he added.

Comments
Topics mentioned in this article
Tennis Maria Sharapova Sania Mirza Spain Rafael Nadal Leander Paes US Open 2013 Tiger Woods
Get the latest updates on Fifa Worldcup 2022 and check out  Fifa World Cup Schedule, Stats and Live Cricket Score. Like us on Facebook or follow us on Twitter for more sports updates. You can also download the NDTV Cricket app for Android or iOS.