Novak Djokovic held a strong mental and tactical edge over Rafael Nadal two years back. Nadal's loss to the Serbian in the 2011 US Open final was the turning point in the rivalry between the world's two best-ranked players. 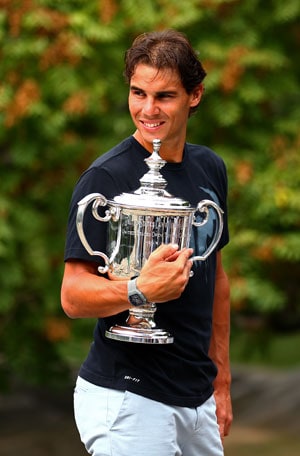 Rafael Nadal's victory over Novak Djokovic in the U.S. Open final was the record 37th installment of the top rivalry in tennis right now - and what is on its way to becoming the greatest in the sport's long history.

Nadal revealed the deflating thought that crossed his mind before he faced Djokovic for the title at Flushing Meadows two years ago. (Read: Nadal rules out calender Grand Slam)

"I was in the locker room," Nadal recalled, "and I was not convinced that I will have the chance to win."

He was right to be pessimistic about that evening's eventual outcome. At the time, Nadal was in the midst of losing seven consecutive meetings - along with the No. 1 ranking - to Djokovic. All of those matches came in finals, three at Grand Slam tournaments: Wimbledon and the U.S. Open in 2011, and at the Australian Open in 2012. (Pics: How Nadal became New York's new poster boy)

Clearly, Djokovic held a strong mental and tactical edge back then. Look where things stand between them now. (Read: Djokovic vows US Open frustration to create motivation)

Nadal's 6-2, 3-6, 6-4, 6-1 win Monday night, earning a second U.S. Open title and 13th major championship in all, made him 6-1 against Djokovic in their last seven encounters. It also raised Nadal's lead in the head-to-head series to 22-15 and made him 8-3 in their matchups at Grand Slam tournaments. (Read: Nadal just wants to enjoy his day after winning US Open)

According to Nadal, a lot has to do with that four-set loss to Djokovic in New York in 2011. After dropping the first two sets, Nadal won the third in a tiebreaker.

"A very important moment for me," Nadal explained. "I was able to change that situation, to fight more than (I had) in the previous matches against him, and (see) a way for me to play. ... Run for every point. Fight, fight for every ball. And play aggressive. And that's what I did in the third set."

"Amazing points in that set. Very long rallies. (You can't) hear the ball, because the crowd is crazy in a lot of points. So that means that was very high quality," Nadal said.

As well as he played, he realized, Djokovic was better then.

"I had to wait a little bit ... (for him to) lose confidence or lose something in his game," Nadal said.

Their next match was the Australian Open final in January 2012, and Djokovic won that one, too.

Except this time, they played five sets stretched over nearly six hours, making it the longest Grand Slam title match in history.

It was a defeat but, Nadal said Monday, "I finished that match in Australia very happy, because another time I was able to change the dynamic."

The next time they played, about three months later in the final at Monte Carlo, Nadal won in straight sets.

He was back on the right path, knowing that one key for him was to play closer to the baseline and look to attack more when possible.

"After that victory, mentally, you feel more confident when you come back on court against him," Nadal said.

Part of what makes their rivalry special is the ability to spur each other. Nadal was better at the start of their careers. Djokovic did what he needed to do to edge ahead. Then Nadal regained the upper hand. Together, they have won 12 of the past 15 major titles.

In the Open era, which began in 1968, no two men have played each other as many times as this pair. Ivan Lendl and John McEnroe are next with 36; Nadal and Roger Federer have 31 meetings.

"You just feel that there is the last drop of energy that you need to use in order to win the point. Sometimes I was winning those points; sometimes him," Djokovic said. "It's what we do when we play against each other, always pushing each other to the limit. That's the beauty of our matches and our rivalry, I guess, in the end."

Nadal vs. Federer provides a contrast in styles. Nadal vs. Djokovic is a matchup of mirror images.

Both are terrific serve returners. Both cover every inch of the court. Both force opponents to hit shot after shot after shot, which is why they wind up playing points that can last more than 50 strokes, as happened Monday. Both can switch from defense to offense with a twist of the wrist.

As of Tuesday, No. 1 Djokovic still leads No. 2 Nadal in the ATP rankings. But both men know that, by year's end, Nadal is likely to regain the edge there, too.

And tennis fans can look forward to more back-and-forth between these two.

Comments
Topics mentioned in this article
Tennis US Open 2013 Rohan Bopanna Leander Paes Lukas Dlouhy Andy Roddick Novak Djokovic Aisam-Ul-Haq Qureshi Rafael Nadal Maria Sharapova
Get the latest updates on Fifa Worldcup 2022 and check out  Fifa World Cup Schedule, Stats and Live Cricket Score. Like us on Facebook or follow us on Twitter for more sports updates. You can also download the NDTV Cricket app for Android or iOS.