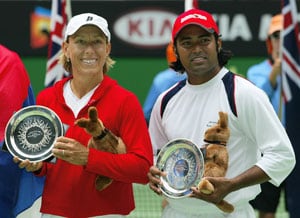 "Playing with Martina for many many years, I have learnt a lot. She is obviously a big inspiration for me to continue to remodel my game and stay healthy. I have also learnt how to live a clean lifestyle and be productive towards my tennis," Paes told reporters on his return after winning the men's doubles trophy at the US Open. (Read: Paes' Grand Slam win not big deal for US media)

He became the oldest man to win a Grand Slam title on Sunday when he along with his Czech partner Radek Stepanek won the men's doubles title at the US Open.

Enduring a tough season this year, Paes was determined to excel at the last Grand Slam of the year.

"I had no idea that I was the first person in the Open era to win a grand slam at 40. What I did know was that this whole year had been such a rough one - both on and off the court. It has been a very hard year. Coming into American summer, I knew I had to do really well.

"My first week in the Canadian Open in Montreal did not go well and the week in Cincinnati was average (got through to the quarterfinals). So I added an extra tournament (Winston-Salem Open) and played with a new partner called Daniel Nestor and we won that one. That seems to have kickstarted the rhythm," he said.

Comments
Topics mentioned in this article
Tennis Leander Paes US Open 2013
Get the latest updates on ICC T20 Worldcup 2022 and CWG 2022 check out the Schedule, Live Score and Medals Tally. Like us on Facebook or follow us on Twitter for more sports updates. You can also download the NDTV Cricket app for Android or iOS.