A champion on all surfaces

Rafael Nadal was once known as the champion of clay. By beating Novak Djokovic in the US Open final, the Spaniard has put a defining exclamation mark on his abilities to play on any surface. 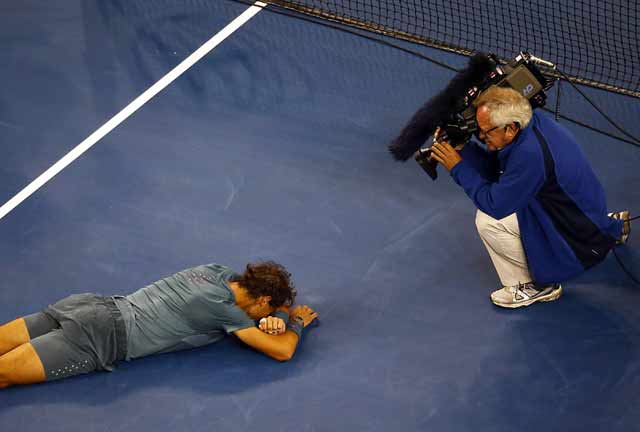 It was early afternoon Monday at the Billie Jean King National Tennis Center and Rafael Nadal's father, Sebastian, and other members of the Nadal clan were wandering through the U.S. Open Court of Champions snapping photographs of the plaques honoring inductees past.

There was a time, not so long ago, when Nadal looked like a long shot for a place on that wall. He was a clay-court champion first and foremost, then a grass-court champion.

But he is among the greats on all the Grand Slam surfaces now and on Monday he put an exclamation point on the most astonishing hardcourt season of his career by beating his new archrival, Novak Djokovic, 6-2, 3-6, 6-4, 6-1, to win the U.S. Open men's championship. (Also see: Match Highlights)

Watching him with no tape on his legs and no ball seemingly too far out of reach, it was frankly hard to believe that he had seriously considered skipping hardcourt tournaments earlier this season to protect himself from a recurrence of the knee problems that had kept him off the tour for seven months.

But Nadal, 27, perhaps the most relentless competitor the sport has ever seen, is nothing if not resilient. He plays, by his own confession, not just to win titles but to have the puritanical pleasure of competing on each and every point.

It is the process more than the destination for Nadal, but he still looked more than delighted when he had finished off Djokovic with a sliver of moon visible in the sky and a tear visible in his eye.

This victory, more grueling than the scoreline would suggest, gave Nadal a second Open title to go with his first in 2010. It also gave him a 13th Grand Slam singles title that seemed anything but unlucky but perhaps the most remarkable statistic after a victory that generated plenty of them was that it preserved Nadal's perfect record on hard courts this season. He is now 22-0, something that would have seemed unthinkable in the years when Nadal's most emblematic rival, Roger Federer was winning five straight titles at the U.S. Open.

For now, Federer remains the career leader with 17 Grand Slam singles titles, but Monday's victory thrusts Nadal ever more into the conversation about who deserves to be called the greatest player of this era.

He also holds a winning record over every one of his major rivals, Federer included.

Djokovic, an elastic 26-year-old Serb, has given him plenty of trouble, never more than in 2011 and early 2012 when he reeled off seven straight victories against the Spaniard.

But Nadal has won six of their last seven meetings, and by their epic standards, Monday's victory was a sprint at 3 hours 21 minutes. It was also a huge payday, guaranteeing Nadal $2.6 million in prize money and an additional $1 million for winning the US Open Series.

Comments
Topics mentioned in this article
Tennis US Open 2013 Maria Sharapova Sania Mirza Novak Djokovic Rafael Nadal Leander Paes Tiger Woods
Get the latest updates on IPL 2021, check out the IPL 2021 Schedule and Indian Premier League Live Score . Like us on Facebook or follow us on Twitter for more sports updates. You can also download the NDTV Cricket app for Android or iOS.