Afghanistan Under-19s claimed a Pakistan wicket via a 'mankad' at the World Cup leading to a heated debate on Twitter over the legitimacy of the dismissal. 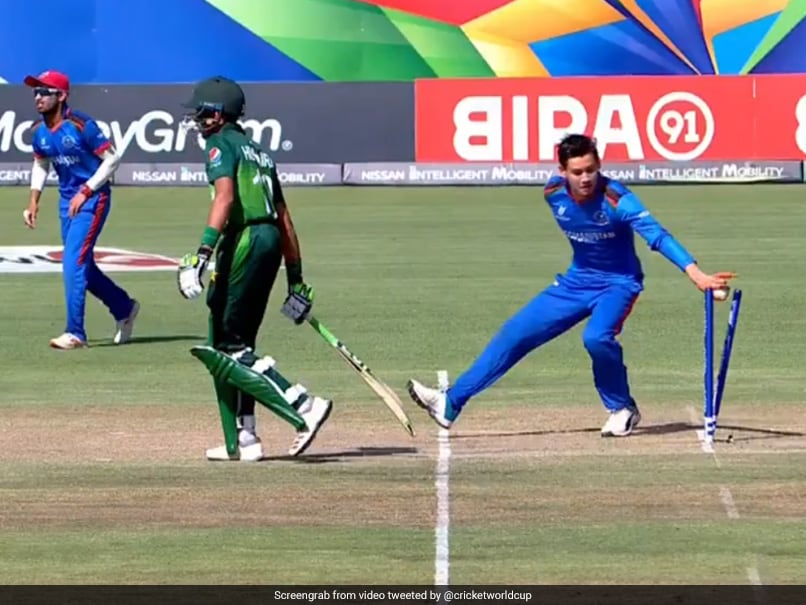 Afghanistan left-arm wristspinner Noor Ahmad kicked up a social media storm after 'mankading' Pakistan opener Mohammad Huraira during the Under-19 World Cup quarterfinal between the two teams at Willowmoore Park in Benoni on Friday. The incident was reminiscent of Ravichandran Ashwin running out Jos Buttler at the non-striker's end in the Indian Premier League 2019 (IPL), which had also led to a heated debate between former players and fans as to the legitimacy of the dismissal. A similar debate erupted on Twitter after Noor Ahmad's 'mankaded' the Pakistani batsman.

While the likes of James Anderson, Dale Steyn and Mark Waugh were dead against the 'mankad' dismissal, others like Harsha Bhogle and Tino Best supported it.

Absolutely. And I am waiting for the day when people say you must warn a batsman before stumping him. The spirit of the game is violated if the non-striker runs less than he should and claims a run. https://t.co/rSobZnKZGT

May I ask what reason you have for wanting it removed/sorted out?

#mankading is within the rules of the game but totally against the spirit. Batters gaining extra ground should be penalised but I personally think it's bollocks, don't like it at all #mankad

This shit's getting outa hand.

That is absolute rubbish from the fielding team. Very poor the batsman was not looking to get a head start. If the bowler had bowled the ball as per normal the batsman would have been ok.

He'd barely left the crease Legend... such a sneaky way to get a wicket. Lawful but not in the right spirit, surely?

Surely 16-year-old boys can have the sense to stay in their crease until the ball leaves the bowler's hand? https://t.co/QzLk7jumvi

Despite Mohammad Huraira's dismissal on 64, Pakistan remained on track in the chase, finally winning the match by six wickets to set up a mouthwatering semi-final clash against India.

Huraira struck 64 off 76 balls on Friday as Pakistan comfortably chased down 190 to beat Afghanistan in the quarter-finals.

Afghan captain Farhan Zakhil admitted after his side's eventual six-wicket defeat that they may not have resorted to the tactic if they had been in a better position.

"At that time, we realised let's do something different to build pressure on Pakistan," Zakhil told ESPNcricinfo.com. "To be honest, it was not in the spirit of the game."

But Huraira conceded that he was to blame for leaving his crease.

"I should've been in the crease, and I'll learn from the mistake. I'll ensure it isn't repeated again."

India made the semi-finals with a 74-run win over Australia on Tuesday, maintaining their perfect record in the tournament having won all of their three group games.

Pakistan U19 Under 19 World Cup 2020 Cricket
Get the latest updates on IND vs NZ 2021, check out the Schedule and Live Score . Like us on Facebook or follow us on Twitter for more sports updates. You can also download the NDTV Cricket app for Android or iOS.