The annihilation of England has left an Australian team that were in the doldrums only six months ago feeling on top of the world. 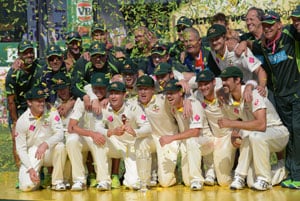 Australia's media on Monday hailed their cobbled together bunch of rejects and recycled players for their decimation of England in a crushing Ashes series whitewash.

Michael Clarke's Australians inflicted a comprehensive 281-run victory in just three days in the final Sydney Teston Sunday to become only the third Australian side to thrash England 5-0 in a series. (Ashes win boosts Aus to world No.3 Test side)

"Never before in 137 years of Test cricket has Australia decimated England so completely, winning the fifth Test inside three days to finish with all 100 English wickets in a series for the first time," The Sydney Daily Telegraph's Malcolm Conn said. (PM Tony Abbott congratulates Aus team)

"And they did it as the Unchangeables, taking the same XI players through all five Tests after the selectors recalled man of the series Mitchell Johnson, 32, and his closest rival for the award, Brad Haddin." (Aussie fans hail team's 'bravado')

The Australian newspaper's Peter Lalor said the whitewash was special because "nothing remotely similar was expected of this lot". (Cricket Australia to felicitate team)

"Clarke's men had lost 4-0 in India and then 3-0 in England a few months back. It has sacked a coach, auditioned more batsmen and bowlers than a television talent contest and navigated a path as bleak as any travelled by an Australian team," he wrote.

"England won a handful of sessions but was soundly beaten from Brisbane to Sydney. (Aussies first to record 300 tons against a single team)

"The home side did it with a reconstituted opener in Chris Rogers, a resurrected bowler in Mitchell Johnson, a reappointed wicket-keeper in Brad Haddin and a rediscovered sense of how to play cricket the Australian way."

The Australian's Wayne Smith said English opener Michael Carberry's bat snapping in half as he pushed forward to defend on Sunday was rich in symbolism amid the carnage of the team's final collapse of the series.

"Perhaps, in the absence of the real symbol of Ashes supremacy, the tiny terracotta urn that is regarded as so fragile it lives almost permanently in the MCC Museum at Lord's, Carberry might be prevailed upon to leave his wounded bat here on these shores as a treasured reminder of one of Australia's greatest Ashes triumphs," Smith said.

He added that "greatness" has never been a word applied to Clarke's side. (Clarke ranks Johnson among pace legends)

"That's what most rankles the English about this series, that their mighty team, so recently ranked number one in world cricket, has been brought low by a team of, well, plodders."

Fairfax Media's Chris Barrett said the annihilation of England has left an Australian team that were in the doldrums only six months ago feeling on top of the world.

"They're not quite there yet -- the savage beating of England over the past eight weeks confirms a leap to number three in the ICC Test world rankings with a visit to top nation South Africa on the horizon next month," he said. (Australia ready for South Africa challenge: Michael Clarke)

"But as Nathan Lyon led them in the team song in the middle of the SCG soon after play it was hard to escape the belief they again are a side to be reckoned with."

Comments
Topics mentioned in this article
Cricket Australia Cricket Team The Ashes 2013 Joe Root Sreesanth Kevin Pietersen Glenn McGrath Shane Watson John Michael Arthur Michael Clarke The Ashes, 2013-14
Get the latest updates on Fifa Worldcup 2022 and check out  Fifa World Cup Schedule, Stats and Live Cricket Score. Like us on Facebook or follow us on Twitter for more sports updates. You can also download the NDTV Cricket app for Android or iOS.