David Warner - the leading run-scorer in the recently concluded Ashes - has fallen in love. Such is the passion that he wasted no time to take the urn to bed, much to the displeasure of English media. 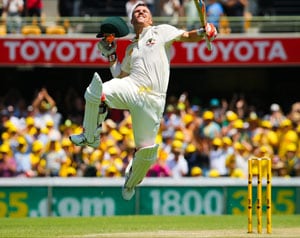 Winning a trophy is one thing. Sleeping with it is quite another. For David Warner though, the not-so-fine line is quite blurred.

The English team conceded the urn after a humiliating 5-0 whitewash against hosts Australia last week. While British press has been scathing in its assessment of the tourists Down Under, there now is a slight note of sympathy as well. "Nobody (at least nobody English) really wanted to see the free-scoring opener kipping with his baggy green on a pillow next to him and a replica of the Ashes urn within reach in his Sydney hotel room," read the report mentioned above. (Also read: Thousands of fans greet Aus team at Sydney Opera House)

Another report - this in The Daily Mail, however focused entirely on Warner, sarcastically saying he deserved to rest with the urn after his repeated on-field banter against the English. "David Warner has been pictured in bed with the Ashes urn and his Baggy Green cap after a hectic series of trying - and succeeding - to antagonise every England player and supporter," it read. "Whenever an England batsman has been walking back to the pavilion, Warner has been largely ignoring his team-mates' celebrations and instead choosing to goad his vanquished opponent." (Also read: I have learnt the need to justify my potential, says Warner)

Warner though has reasons to snuggle up to the urn. The 27-year-old was not just shooting from his mouth in the five Tests but also made his bat talk. He finished as the highest run-scorer in the series, with 523 runs at an average of 58.11.Â  He also hit two fifties and two centuries.

So, while his bed-time celebrations may have touched a sensitive nerve in the stiff British upper-lip, Warner may as well feel he deserves to enjoy with his latest conquest.

Comments
Topics mentioned in this article
Cricket Australia Cricket Team England Cricket Team David Warner The Ashes 2013 The Ashes, 2013-14
Get the latest updates on SA vs IND 2021-22, check out the Schedule and Live Score . Like us on Facebook or follow us on Twitter for more sports updates. You can also download the NDTV Cricket app for Android or iOS.