English media said Andy Flower was ready to quit unless he was given guarantees that Kevin Pietersen would not be selected. Flower has rubbished the reports. 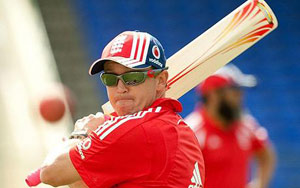 English media said Flower was ready to quit unless he was given guarantees that the polarising batsman would not be selected to play under him in the fallout following the 5-0 Ashes series humiliation at the hands of Australia.

It follows rumours of a breakdown in their relationship, reportedly sparked by Pietersen making himself unavailable for one-day international matches last year in order to play in the lucrative Indian Premier League.

The former captain, who has been struggling with a long-term knee injury, reiterated his desire to reach 10,000 Test runs -- he currently has 8,181 -- and said he wanted to play in the Ashes in England next year.

Flower said in a statement that no snap decisions would be made despite the humbling by England's oldest rivals.

"It would be sensible and responsible to review the tour in a calm and logical manner before assessing our options for the future and planning ahead," he said.

"I repeat that neither I nor the wider ECB (England and Wales Cricket Board) leadership group have made any decisions as to the future involvement of any individuals in the playing group or in the support staff.

"The reports that I have issued an ultimatum of some description to the ECB are totally inaccurate."

Paul Downton, the ECB's new managing director, will conduct an internal review of the Ashes whitewash when the futures of Flower, Pietersen and skipper Alastair Cook among others will be discussed.

Reports said that Downton would speak to each player and member of the backroom staff and would take his time before making any decisions on the fate of leading figures within the management and team.

Flower has told the ECB he wants to rebuild the England side and the board has so far backed him publicly, but ultimately the decision to keep him or not will reportedly rest with Downton.

Pietersen is not in the squad for the upcoming one-day international series, which starts in Melbourne on Sunday.

Comments
Topics mentioned in this article
Cricket The Ashes 2013 Ian Bell Michael Clarke Andy Flower Kevin Pietersen England Cricket Team The Ashes, 2013-14
Get the latest updates on SA vs IND 2021-22, check out the Schedule and Live Score . Like us on Facebook or follow us on Twitter for more sports updates. You can also download the NDTV Cricket app for Android or iOS.