The Ashes: I have learnt the need to justify my potential, says David Warner

David Warner went from being embroiled in multiple controversies to orchestrating Australia's 5-0 Ashes win over England in what was an eventful period, both on and off the field, in 2013. The explosive left-hander credits his fiancé Candace Falzon for the turnaround. 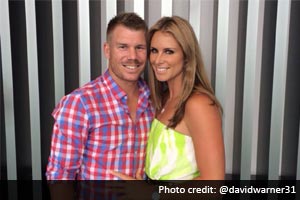 Australia's David Warner endured a roller-coaster 2013. After being dropped due to poor form and indiscipline in the first half of the year, Warner went on to be one of the chief architects of Australia's whitewash of England in the Ashes 2013-14, a series victory that has set the tone for 2014 for the explosive left-handed batsman. (Australia reclaim the Ashes in style)

While runs were hard to come by on the field, Warner also went through a long, frustrating phase off it. However, Warner has come a long way by not just making his comeback but also playing the role of one of the pillars of Australia's Ashes win. In an interview with Cricbuzz.com, Warner looked back at a tumultuous 2013 and its lessons. (Thousands of fans greet Australian team at Sydney Opera House)

"You can say I am a much more balanced individual as a result of all that I went through in 2013. I have learnt the need to do justice to my potential and also grown as a human being. Life never ceases to teach you and my lessons from 2013 should do me good in the days and months to come," Warner said. (Australia move up to third spot in Test rankings)

The series of problems began during the Indian Premier League 2013 when Warner was punished by Cricket Australia for his tirade on a couple of Australian journalists who questioned his form and intent on Twitter. This was followed by a bar brawl in Birmingham during the ICC Champions Trophy in June where Warner punched England batsman Joe Root, an act that the Board termed as 'despicable.' A month later, Warner was dropped from the side that toured India.

That was the point where Warner had to stop and introspect, keeping in mind his future as an Australian cricketer.

"Having played continuous cricket for 18-24 months I was losing it in the mind. First, the issue on Twitter and then the Joe Root incident, I was clearly losing the plot. The final thing was getting dropped from the Australian touring team to India. I had to ask myself if I was content with being cricket's bad boy and if I'd walk away from the game I love so much with this tag or will I stage a comeback and play for a further 10 years and leave behind a legacy I'd be proud of," Warner said. (Also read: Warner's bedroom 'threesome' irks British press)

The revival didn't come easily to Warner but he kept his head down and stayed as focused as he could. His girlfriend and fiance Candace Falzon played a massive role in helping Warner straighten out the mess and helped him concentrate purely on his game again.

Talking about the woman behind his success, Warner said, "She has been a very positive influence on me. Candace is extremely hard working and starts her day at 4am every day. Seeing her do it day after day, I felt I could learn from her and changed my training schedule in the process."

"I started getting up at 5 am and worked on my fitness trainer four times a week and with my batting coach three times a week. I worked really hard and pushed myself to get into a strict and highly disciplined training regime," he added.

Despite such a strict regime, Warner's willow continued to be silent as he failed in four successive Ryobi Cup matches but a turnaround was in the offing. It began with a sensational knock of 197 from 141 deliveries in the same tournament, after which Warner hasn't looked back.

Warner scored another hundred and carried the good form with the bat into Ashes 2013-14 which Australia regained in style. There was a renewed sense of confidence in his trademark counter-attacking style of play as he notched up tons in the first and the third Test of the series.

"I am delighted to have contributed to the team. But one must single out the performances of Mitchell Johnson and Brad Haddin. Take the first Test in Brisbane for example. It was Mitch and Brad who took the match away from the English. They were pivotal to our success and all the other members of the team worked around them. Steve Smith was brilliant as was Ryan Harris, Peter Siddle and Chris Rogers. I managed to do well in the second innings of the first three Tests and that does give me a lot of satisfaction," Warner said.

Warner has risen from the shambles that he was in at the start of 2013 and finished the year on a high. While its 'alls well that ends well' for the aggressive batsman, he will hope to take the momentum forward when Australia travel to South Africa in February.