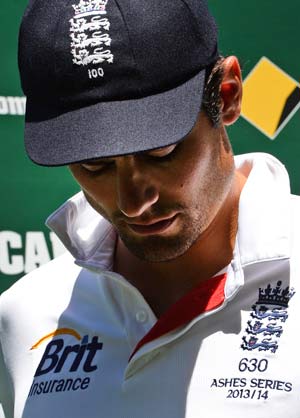 England great Geoffrey Boycott accused the current team of batting like "one-day clowns" after their 5-0 Ashes thrashing in Australia. A series where England were bowled out for under 200 on six occasions ended in humiliation when they were dismissed for just 166 inside 32 overs on the third day of the concluding Test in Sydney on Sunday as they went down to a 281-run defeat.

It was only the third time in Ashes history that England had been thrashed 5-0 by arch-rivals Australia but Boycott said there was a key difference between his reverse and their last whitewash in 2006/07. (Read: Monty Panesar calls woman to his room, hours after Ashes debacle: report)

"They were totally humiliated by an Australian team that is good, but not great," Boycott wrote in his column in Monday's UK Daily Telegraph.

"The last whitewash was achieved by a team containing Shane Warne, Glenn McGrath and Adam Gilchrist. They had three once-in-a-lifetime players and there was no shame in losing 5-0 to them. But we should be ashamed and embarrassed to lose so abjectly to this lot." (Related: Alastair Cook says every English player let themselves down)

Boycott, renowned for his defensive skills and one of England's greatest openers, said the current team's extensive backroom staff meant players had stopped thinking for themselves.

"Over recent years England have employed more backroom staff believing it makes them more professional. In fact, they have over-complicated professionalism. We have coaches for everything. Psychologists, team analysts and an 82-page diet book that made us a laughing stock. (Also read: More pain to come for shattered England, says Flower)

"It is time they got into the real world and stopped wasting money on frivolous luxuries that do not make any difference when (Australia fast bowler) Mitchell Johnson is whistling it around your earhole. The players have stopped thinking for themselves.

"In my day when we had a problem, either with batting or bowling, we used to talk it over with our colleagues in the team and worked things out together," added the 73-year-old Yorkshireman, who in 108 Tests from 1964-1982 scored 8,114 runs at 47.72 with 22 hundreds. (Click here for more Ashes stories)

"It built team morale. It engaged everyone in the dressing room. Now we have robots waiting for a coach and an analyst with a laptop to tell them what they are doing wrong.

"Well, I can tell our batsmen what they did wrong. They forgot the principles of Test match batting. They batted like one-day clowns.

"The batting was as bad as anything I have seen from an England side. We have stopped playing Test match innings. Somehow we have to get our batsmen to remember how to bat for long periods of time."

Comments
Topics mentioned in this article
Cricket Geoffrey Boycott The Ashes 2013 West Indies Cricket Team England Cricket Team Australia Cricket Team The Ashes, 2013-14
Get the latest updates on Fifa Worldcup 2022 and check out  Fifa World Cup Schedule, Stats and Live Cricket Score. Like us on Facebook or follow us on Twitter for more sports updates. You can also download the NDTV Cricket app for Android or iOS.