Pietersen's future has been under the spotlight during England's recent 5-0 Ashes series thrashing in Australia, with the 33-year-old managing only 294 runs in the five tests at an average of under 30. 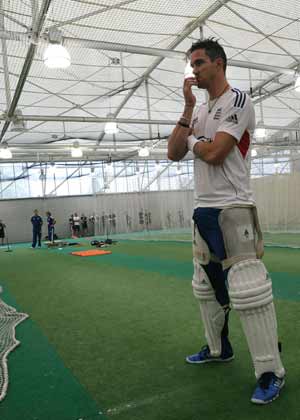 Kevin Pietersen has insisted he has no intention of retiring and is determined to help England regain the Ashes next year.

Pietersen's future has been under the spotlight during England's recent 5-0 Ashes series thrashing in Australia, with the 33-year-old star batsman managing a total of only 294 runs in the five tests at an average of under 30.

The 33-year-old former England captain has also been struggling with a long-term knee injury but on Monday reiterated his desire to get to 10,000 Test runs -- he currently has 8,181 runs -- and said he wanted to play in the next Ashes series in England in 2015. (More pain to come, says Flower)

"Very disappointed to lose 5-0, and not to score more runs personally. Tough tour against a top class team. #Ashes," Pietersen said on Twitter.

"I want to thank all the England fans for their terrific support. And I'm determined to help regain the Ashes in 2015."

Pietersen, despite his modest tally, was England's leading run-scorer during the Ashes and was one of several players who came under fire from England great Geoffrey Boycott.

But former England captain Michael Vaughan, Pietersen's first Test skipper and a team-mate in the 2005 Ashes-winning side, said it was vital he wasn't held solely responsible for this whitewash by Australia.

"Alastair Cook needs to use Pietersen properly and ask him how he sees his own future, and his view on the style of cricket the team have to play to become number one in the world again," Vaughan wrote in the Daily Telegraph.

"I fear England will not do that and decide to get rid of Pietersen. That would be a sad loss for English cricket, the game cannot afford for that to happen.

"He is too good a player. The team will be dull without him. Okay, you have to have the right characters in the dressing room. But if you cannot manage someone such as KP then you are not doing your job properly.

"It would be a huge loss if this England management cannot get two more years out of Pietersen and let him lead them to playing the brand of cricket we want to see," Vaughan added.

"I guarantee if they give Pietersen responsibility they will win more games, win them quicker and gain new fans."

Comments
Topics mentioned in this article
Cricket England Cricket Team Australia Cricket Team Joe Root The Ashes 2013 Sreesanth Kevin Pietersen Glenn McGrath Michael Clarke John Michael Arthur Shane Watson The Ashes, 2013-14
Get the latest updates on SA vs IND 2021-22, check out the Schedule and Live Score . Like us on Facebook or follow us on Twitter for more sports updates. You can also download the NDTV Cricket app for Android or iOS.