The players were introduced on stage alongside Prime Minster Tony Abbott, minus veteran opener Chris Rogers, who turned up late after his alarm failed to go off. 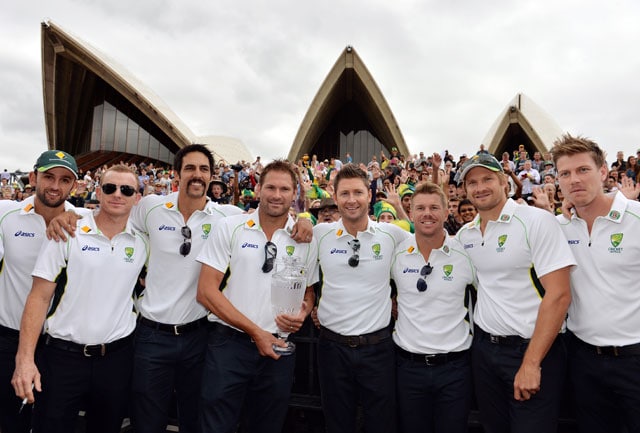 Michael Clarke's Australians whitewashed England 5-0 and they have been celebrating since winning the final Test in Sydney on Sunday.

"The players deserve all the credit. They have done a lot of hard work," Lehmann, who has overseen a dramatic turnaround in the past six months, told the crowd. (Lehmann changed Australian mindset: Watson)

"Winning the first one at the Gabba was important and we gained confidence and went from strength to strength.

"The pleasing thing is the way they play -- nice, aggressive, hard cricket, the Aussie way."

The players were introduced on stage alongside Prime Minster Tony Abbott, minus veteran opener Chris Rogers, who turned up late after his alarm failed to go off.

"You were the improbables because no one expected you to win," said Abbott.

"You have been the unchangeables, the first team in 100 years to be unchanged through a whole series."

Clarke hailed the support from fans throughout the series, including a new world record crowd of 91,092 on the opening day of the fourth Test at the Melbourne Cricket Ground.

"It's extremely satisfying. All the hard work has paid off," he said.

"Most important for the team was the support we have had throughout the entire series."

The players will return to their home states on Wednesday ahead of the upcoming one-day series against England, which starts in Melbourne on Sunday.