Ashleigh Barty, playing in her WTA Finals debut, will look to cap off a momentous season when she plays Elina Svitolina in Sunday's final. 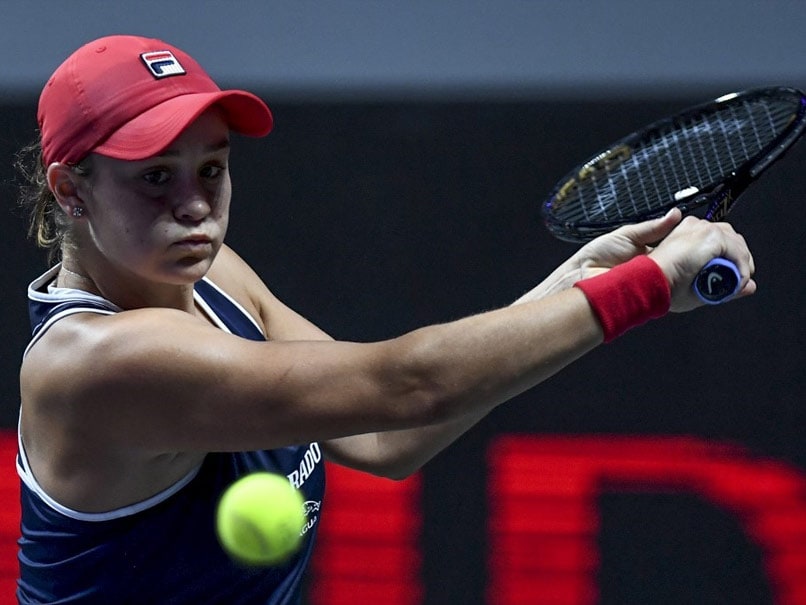 Ashleigh Barty will finish with the year-end number one ranking.© AFP

World number one Ashleigh Barty overcame the hitting power of Karolina Pliskova with a comeback victory on Saturday to set up a mouth-watering WTA Finals decider against defending champion Elina Svitolina. The French Open champion prevailed 4-6, 6-2, 6-3 in one hour and 53 minutes in a matchup of the top two ranked players in the world. Barty, playing in her WTA Finals debut, will look to cap off a momentous season when she plays Svitolina in Sunday's final.

Ukraine's Svitolina won her 10th straight WTA Finals match with a 5-7, 6-3, 4-1 victory over a hobbled Belinda Bencic in one hour and 50 minutes.

The Swiss struggled with cramping from late in the first set but gamely fought on before retiring hurt.

Barty hoped to end the curse on her against Svitolina, having lost all five previous meetings.

"It's a match I can come out here and enjoy," she said. "I have nothing to lose and I will try to end my regular season really well."

Pliskova attacked Barty's serve from the get-go but could not convert numerous chances to break before finally succeeding on her eighth attempt in the third game, enough to claim the first set.

Barty, who will finish with the year-end number one ranking, continued to struggle on serve but fought back into the contest through menacing slices and crafty lobs.

She gained a decisive break in the fourth game and her serve improved to take the match into a deciding set. Barty upped her game with deft touch at the net and she gained the crucial break in the sixth game with a forehand winner.

Pliskova could not recover and fell in the semi-finals for the third straight time at the lucrative tournament.

Earlier, an indefatigable Svitolina came from behind to continue her dogged quest to defend her title.

The Ukrainian, who has not won a title since last year's WTA Finals, did not lose a set during the round-robin phase and remains on track to claim a maximum prize of US $4.725 million -- the highest pay cheque in tennis history.

"It's very tough for her (Bencic)," Svitolina said. "I'm going to leave everything on the court (in the final) to try to raise the cup again."

Bencic's early aggressiveness paid off when a blistering backhand return winner captured the break in the sixth game. But she couldn't capitalise on serve and then later in the first set required medical attention on her right hamstring.

Bencic seemed rejuvenated from the treatment and immediately pounced on a loose Svitolina service in the 12th game to claim the set emphatically with a backhand winner down the line.

Svitolina rediscovered her potent counterpunch in the second set and hit the lines to move around an increasingly frustrated Bencic, who was restricted in her movement.

Svitolina cruised through the set to draw level and her momentum continued until Bencic pulled the pin.

She was the third player to retire mid-match in the tournament following the withdrawals of Kiki Bertens and Bianca Andreescu. World number three Naomi Osaka withdrew from the year-ender before her second match against Barty.

"I think these courts are terrible for movement of players and for the muscles," Bencic said of the indoor hard court.

Comments
Topics mentioned in this article
Ashleigh Barty Karolina Pliskova Tennis Elina Svitolina
Get the latest updates on ICC T20 Worldcup 2022 and CWG 2022 check out the Schedule, Live Score and Medals Tally. Like us on Facebook or follow us on Twitter for more sports updates. You can also download the NDTV Cricket app for Android or iOS.