US Open: Serena, Venus Williams To Clash For 30th Time

Serena Williams enjoys a 17-12 head-to-head superiority against her sister Venus. 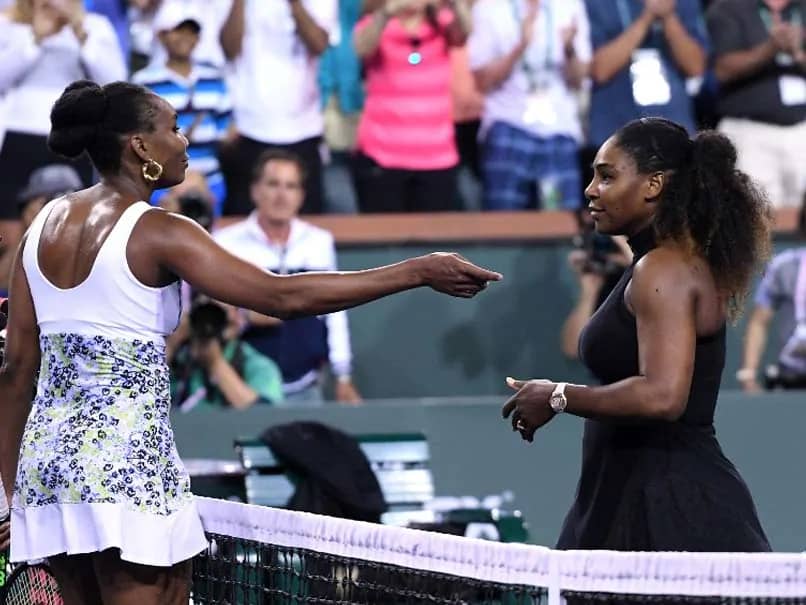 Serena and Venus Williams will clash for the 30th in their career.© AFP

Serena and Venus Williams set up a 30th career meeting on Wednesday as the US Open reeled from a sexism row sparked when a player changed her shirt on court. Six-time champion Serena eased into Friday's third round encounter against her sister with a 6-2, 6-2 win over German world number 101 Carina Witthoeft on the back of 30 winners and 13 aces. Venus, the 2000 and 2001 champion, made the third round for the 17th time with a 6-4, 7-5 victory over Camila Giorgi of Italy. Friday's match will be the earliest the sisters have met at a Slam since the 1998 Australian Open in what was also their first ever clash. It will be their sixth face-off in New York.

"Friday will be incredibly hard," said Serena before jokingly hitting back at Venus's claim that when they last met at a Slam in the final of the 2017 Australian Open her sister had an advantage as it was "two against one".

That was a reference to Serena being in the early stages of pregnancy with her daughter Olympia.

"I guess I had a little advantage but it's going to be hard for me on Friday," said 36-year-old Serena.

Since Venus won their first ever clash in Australia, Serena, bidding for a record-equalling 24th Grand Slam title, has built up an advantage over the last two decades, enjoying a 17-12 head-to-head superiority.

"It's a tough match to have so early in the tournament. We would have liked to have played later but it is what it is. It's not the end of the world," added Serena.

Venus, 38, and playing her 80th Slam, notched up her 775th career win by seeing off Giorgi.

However, she was reluctant to discuss Serena when asked to describe the specific challenges.

"You're beating it up now. Any other questions about anything else?" she barked.

Defending champion and third seed Sloane Stephens also made the third round with a marathon 4-6, 7-5, 6-2 win over Ukraine qualifier Anhelina Kalinina.

Stephens triumphed after 2 hours and 46 minutes on Arthur Ashe Stadium and will next face two-time Australian Open champion and former world number one Victoria Azarenka.

The American needed treatment on a blistered right hand in the second set as the crushing effect of the heat and humidity took its toll.

However, the 10-minute heat-break between the second and third sets proved a timely boost.

"I just sat on the floor, changed my outfit, had two bites of Sushi and a slushie," said the 25-year-old Stephens after seeing off world number 134 Kalinina.

Azarenka was amongst the first players to condemn the United States Tennis Association (USTA) for handing French player Alize Cornet a code violation for changing her shirt on court on Tuesday.

The incident sparked an immediate storm over sexism.

The Belarusian said the USTA displayed double standards for sanctioning Cornet while male players routinely remove their shirts courtside when the heat and humidity bite.

"If I would say my true feelings, it would be bleeped out, because it was ridiculous," said Azarenka.

The USTA admitted they were wrong to hand Cornet a warning for slipping off her shirt on court after realising she had put the garment on back-to-front during a heat-break.

Cornet said she was stunned that the furore had caused so much controversy and was happy to accept the USTA's apology.

"I think it's very fair from them to apologise to me. I think the umpire was probably overwhelmed by the situation," said Cornet who insisted that French tennis federation (FFT) president Bernard Giudicelli's Roland Garros ban on Serena Williams's catsuit was much worse and genuinely worthy of being deemed 'sexist'.

"The president of my federation lives in another time and can still do these kind of comments. They are totally shocking for me," she said.

"What Bernard Giudicelli said about Serena's cat suit was 10,000 times worse than what happened to me."

Ukrainian seventh seed Elina Svitolina cruised past Tatjana Maria 6-2, 6-3 to avenge a first round defeat at the hands of the German player at Wimbledon last month.

Estonia's Kaia Kanepi followed up her first round win over world number one Simona Halep by seeing off Jil Teichmann of Switzerland 6-4, 6-3.

However, ninth seeded Julia Goerges, a semi-finalist at Wimbledon, slumped to a 7-6 (12/10), 6-3 defeat to Ekaterina Makarova of Russia.

Comments
Topics mentioned in this article
Serena Williams Venus Williams Tennis
Get the latest updates on IPL 2021, IPL Points Table , IPL Schedule 2021 , live score . Like us on Facebook or follow us on Twitter for more sports updates. You can also download the NDTV Cricket app for Android or iOS.