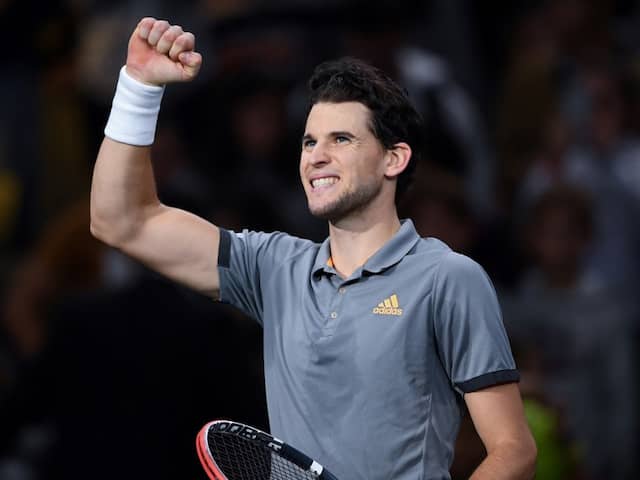 Dominic Thiem booked his spot in the Paris Masters third round.© AFP

Dominic Thiem booked his spot in the Paris Masters third round on Wednesday by edging out Milos Raonic in a marathon encounter, while Greek star Stefanos Tsitsipas also progressed. Fifth seed Thiem had to dig deep to get past Raonic 7-6 (7/5), 5-7, 6-4 as the Canadian powered down 30 aces in a thunderous serving display. But Thiem, who has lost the last two French Open finals to Rafael Nadal across Paris at Roland Garros, saved nine of 10 break points to stay with his opponent before clinching the crucial breakthrough in game nine of the deciding set.

"It was unbelievable today, his serve," admitted the Austrian after winning in two hours and 38 minutes.

"He served almost all his serves between 205 (kph) and 230. When you have your chances you feel under so much pressure because you know you won't have many."

Thiem, who reached the semi-finals at Bercy last year, will face either Belgian 12th seed David Goffin or Bulgaria's Grigor Dimitrov in the last 16.

"The draw is unreal, only top players," he added. "It was already for me a horrible draw in this round and it won't get any easier from here."

World number seven Tsitsipas continued his return to form with a 7-6 (7/3), 6-3 victory over American Taylor Fritz.

The 21-year-old Tsitsipas struggled following the end of the clay-court season, but has since recovered and arrived in Paris having reached at least the semi-finals in each of his previous three events.

He claimed a tight opening set in a tie-break before cruising through the second to book a clash with either ninth seed Roberto Bautista Agut or in-form Australian teenager Alex de Minaur.

The 20-year-old Shapovalov has already reached three Masters semi-finals in his career, including at Miami earlier this year, while the defeat ends Fognini's chances of qualifying for next month's ATP Tour Finals in London.

Comments
Topics mentioned in this article
Dominic Thiem Milos Raonic Tennis
Get the latest Cricket news, check out the India cricket schedule, Cricket live score . Like us on Facebook or follow us on Twitter for more sports updates. You can also download the NDTV Cricket app for Android or iOS.