Dominic Thiem will face Diego Schwartzman in the final after the Argentine fifth seed beat Gael Monfils 6-3, 6-2 in his semi-final. 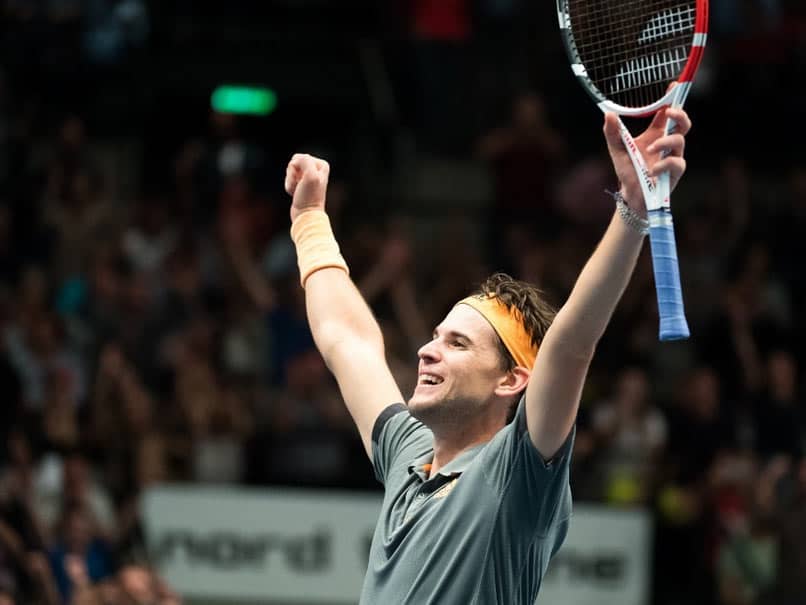 Dominic Thiem closed in on his 16th career title on Saturday.© AFP

Dominic Thiem closed in on his 16th career title on Saturday after reaching the final in Vienna by beating Matteo Berrettini in an enthralling semi-final 3-6, 7-5, 6-3. Top seed Thiem will face Diego Schwartzman in the final after the Argentine fifth seed beat fourth-seeded Frenchman Gael Monfils 6-3, 6-2 in his semi-final. "I never experienced such a great atmosphere here. It was full from the first point on," said Thiem after reaching his first Vienna final. "It was perfect to play in and the match was on a very high level from the first to the last point... With all the support and home advantage, I was able to pull through."

The world number five, who won the China Open earlier this month, also gained revenge on Berrettini for beating him in the quarter-finals in Shanghai two weeks ago.

However 23-year-old Berrettini will still be satisfied with his tournament, as his last four finish ensures that he will become only the fourth Italian man to break into the world top 10 and boosts his hopes of making the season-ending ATP finals.

Berrettini came out on top of an entertaining first set which saw both players share breaks of serve before the Italian held his in game eight to make it 5-3, then breaking Thiem again to seal the set.

The pair opened the second set by exchanging service games until Thiem snatched game five, when after fighting back from break point to deuce Berrettini hit two weak shots into the net to fall a break back.

Berrettini broke back in a tight game eight and comfortably took the lead on his serve in the next before Thiem levelled at 5-5 on his serve.

Backed by a roaring home crowd, Thiem then got the arena on its feet when he broke again after another game taken to deuce before serving out the set to level the match.

He took control of the third set in game seven when he broke to make it 4-3 after the pair slugged out six service games.

He then held his serve and made sure of the win on Berrettini's next service game to give himself a chance to win his fifth tournament of the season.

Comments
Topics mentioned in this article
Dominic Thiem Tennis
Get the latest updates on India vs Australia Series, check out the India vs Australia Schedule for 2020-21 and Ind vs Aus live score . Like us on Facebook or follow us on Twitter for more sports updates. You can also download the NDTV Cricket app for Android or iOS.