Novak Djokovic defeated Filip Krajinovic in the first round in Vienna on Tuesday to edge closer to Pete Sampras's all-time record of ending the year as world number one on six occasions. 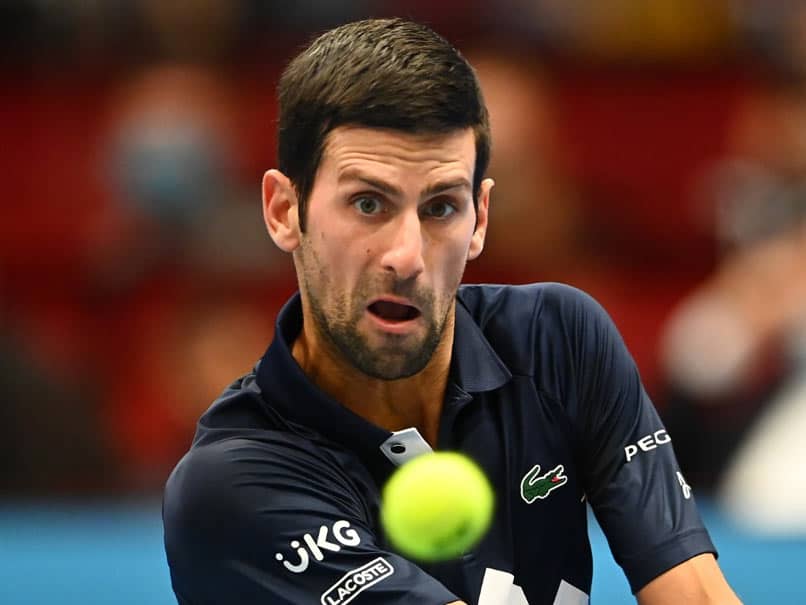 Novak Djokovic has been the top-ranked player at the end of a season five times.© AFP

Novak Djokovic defeated Filip Krajinovic in the first round in Vienna on Tuesday to edge closer to Pete Sampras's all-time record of ending the year as world number one on six occasions. Djokovic beat compatriot Krajinovic 7-6 (8/6), 6-3 and needs to win his next match in Austria against Borna Coric to ensure he equals the achievement of his childhood idol. The 33-year-old Serb has been the top-ranked player at the end of a season five times: in 2011, 2012, 2014, 2015 and 2018.

He shares that mark with career rivals Roger Federer and Rafael Nadal.

Sampras achieved the feat six years in succession between 1993 and 1998.

Djokovic was playing in Vienna for the first time since he won the title there in 2007, and dropped serve twice in a tricky opening set.

Krajinovic served for the first set at 5-4 and then held a set point in the tie-break but couldn't take advantage.

A couple of breaks in the second set allowed Djokovic to clinch victory -- his 38th in 40 matches this year.

"First set, I think he was the better player. He was serving for the first set and I was lucky. He missed a smash at 6/6 in the tie-break," said Djokovic.

"A few points here and there can change the momentum of the match. In the second set, I stepped it up, I played better and I am just pleased with the way I finished the match."

The 17-time Grand Slam title winner is appearing at his first tournament since his heavy loss to Nadal in the Roland Garros final two weeks ago.

Djokovic is also attempting to beat Federer's all-time best of 310 weeks spent on top of the rankings.

On Monday, Djokovic began his 292nd week in total as world number one.

Djokovic and US Open winner Dominic Thiem are two of six top 10 players in the draw in the Austrian capital.

Novak Djokovic Tennis Filip Krajinovic
Get the latest updates on IPL 2021, IPL Points Table , IPL Schedule 2021 , live score . Like us on Facebook or follow us on Twitter for more sports updates. You can also download the NDTV Cricket app for Android or iOS.