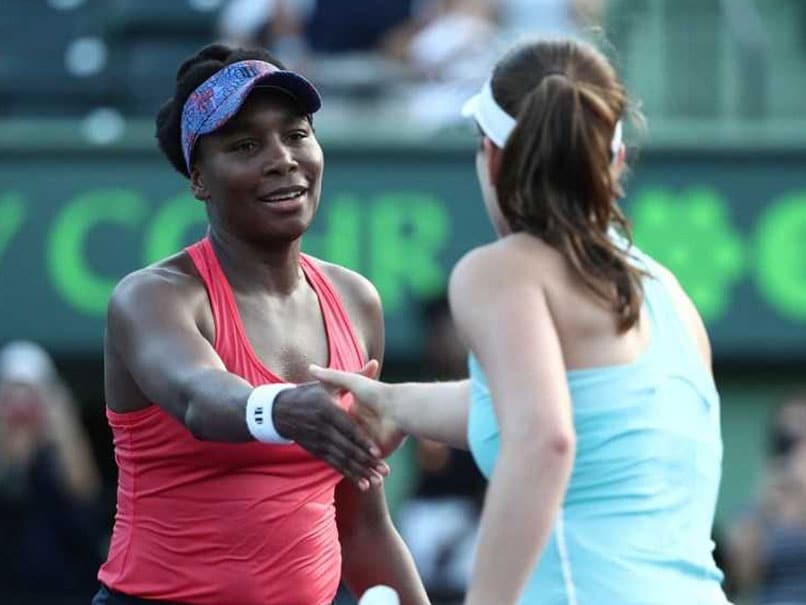 Seven-time grand slam winner Venus Williams exacted revenge on reigning Miami Open champion Johanna Konta on Monday with a superlative display to book her place in the quarter-finals. In a repeat of last year's semi-final -- which was won by the British number one Konta -- it was the 37-year-old American who showed no signs of fatigue to power home 5-7, 6-1, 6-2 in two hours and 19 minutes. The three-time Key Biscayne champion now faces either Monica Puig or American Danielle Collins. It was an impressive display by the veteran Williams who seemed puzzled when quizzed about her longevity.

"I don't see what 37-years old has to do with it," said Williams. "She couldn't get a rhythm to her game which helped me but everyone I play makes it tough against me so there are no easy matches."

Williams also had to work hard in a three-hour battle on Sunday for her passage into the fourth round, fighting off three match points before eventually seeing off Kiki Bertens.

It was the Briton who started the more assuredly on Monday. Konta broke the Williams straight away to set down an early marker in their first meeting since the semi-finals at Wimbledon last summer which resulted in home heartbreak for the 26-year old.

Williams faced more breakpoints in the third although this time the danger was averted, thanks to some powerful serves.

"You have to fight for every point," she said. "Everyone is so good now. I feel very focussed."

Just when the erratic Konta needed to put her foot on the accelerator, it was William who responded superbly to put her opponent firmly on the backfoot.

Indeed, Konta's game seemed to totally desert her. She hit just one winner in the second set as the American began to dominate and send the encounter into a decider which began with Konta receiving lengthy treatment for a back problem.

"My body didn't adapt to the conditions - it was quite swirly out there - and that puts strain on your body," said Konta.

"It wasn't so much a back injury. It was a muscle spasm more than anything else. I just wanted to make sure it didn't turn into something serious."

Konta, who has now slipped from number 14 to number 22 in the world, added, "You always have to appreciate players who fight through matches like she does, especially considering how long she's been playing."

Williams will be joined in the quarters by compatriot Sloane Stephens who powered past world number three Garbine Muguruza as the seeds continued to fall.

Stephens, the world number 12, will face Germany's Angelique Kerber for a place in the semi-finals.

Muguruza had been the highest ranked player left in the women's draw following the early exits of world number one Simona Halep and Caroline Wozniacki.

Pliskova was leading 6-2, 2-1 when the Kazakh player abandoned with an injury.