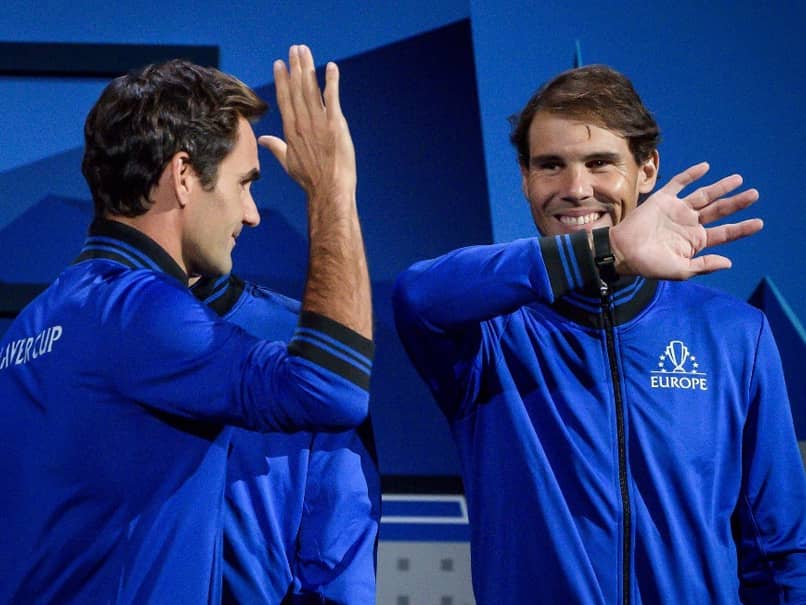 Watching Roger Federer and Rafael Nadal bonding and helping each other out whilst playing for one team is a sight to watch for anybody but throw Bjorn Borg into the mix and it's a dream come true for any tennis fan. Thanks to the Laver Cup, the three legends of the sport have come together to lead Team Europe's charge in the tournament. On Saturday, the legendary trio were seen together in one video, sending fans into a complete meltdown. And the video was made the all the more special thanks to Roger Federer's brilliant coaching tips for Rafael Nadal, who was facing a stiff challenge from Team World's Milos Raonic.

During his match against Raonic in the Laver Cup, Nadal came up against stiff resistance from the Canadian but found help in his Europe teammate Roger Federer.

In a video posted by the official handle of Laver Cup, Federer can be seen coaching Nadal on how to combat the Canadian with Bjorn Borg standing right next to the duo and listening in.

"Spin, slice... you know, like in the old days!" @rogerfederer pays a visit to @RafaelNadal after he's broken, and his #TeamEurope teammate breaks right back. On serve in set two, 3-4 with Raonic serving.#LaverCup pic.twitter.com/pUSRCMcgmS

Rafael Nadal, who only recently won his 19th Grand Slam title in New York, fought hard against Raonic and with some helping hand from his Swiss teammate, he emerged victorious 6-3, 7-6 (7/1) after defending eight break points in the first set.

"I feel very lucky," said Nadal. "I think he deserved that first set for sure. Later in the match I think I started to play a little bit better."

"The crowd could feel it, I could feel it. I needed to get some energy going but you can't do that if you don't play any good shots and Nick was playing very well," said Federer, the 20-time Grand Slam champion.

"I was just trying to stay focused. If you can turn the momentum, the crowd gets back into it and I need some earplugs next time, it was just phenomenal."

Nadal, however, had to taste defeat in the doubles tie later in the day. Pairing up with young gun Stefanos Tsitsipas, the Spaniard could not overcome Team World duo Jack Sock and Nick Kyrgios.

Comments
Topics mentioned in this article
Rafael Nadal Roger Federer Milos Raonic Tennis
Get the latest updates on India vs England Series, India vs England , live score and IPL 2021 Auction . Like us on Facebook or follow us on Twitter for more sports updates. You can also download the NDTV Cricket app for Android or iOS.