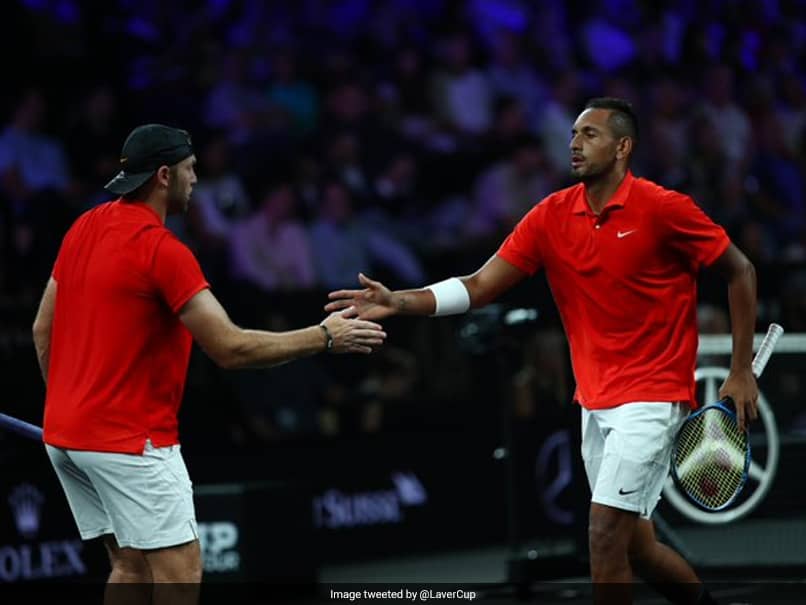 Jack Sock and Nick Kyrgios paired up to defeat Rafael Nadal and Stefanos Tsitsipas as Team World cut Europe's lead to 7-5 heading into the final day of the Laver Cup in Geneva. Sock and Kyrgios won Saturday's doubles 6-4, 3-6, 10-6 after Nadal defeated Milos Raonic in his first match since his US Open triumph in the singles. "There was a lot on the line there," said Sock. "We obviously wanted to keep the overall weekend close. Being down 9-3 is different than 7-5. "We've had so many chances this weekend, it's been crazy, so I think the score could be the other way round.

"I thought it was a high quality match and we're definitely happy to get the win."

"I feel very lucky," said Nadal. "I think he deserved that first set for sure. Later in the match I think I started to play a little bit better."

"The crowd could feel it, I could feel it. I needed to get some energy going but you can't do that if you don't play any good shots and Nick was playing very well," said Federer, the 20-time Grand Slam champion.

"I was just trying to stay focused. If you can turn the momentum, the crowd gets back into it and I need some earplugs next time, it was just phenomenal."

The scoring system sees one point awarded for each win on the first day, two points given for each victory on the second day, and three points on offer in each match on Sunday's final day.

This year is the first time the tournament has been played since being added to the ATP Tour.

Comments
Topics mentioned in this article
Nick Kyrgios Jack Sock Rafael Nadal Tennis
Get the latest updates on IPL 2021, IPL Points Table , IPL Schedule 2021 , live score . Like us on Facebook or follow us on Twitter for more sports updates. You can also download the NDTV Cricket app for Android or iOS.