Prajnesh Gunneswaran, Jeevan Nedunchezhiyan and Divij Sharan can't exactly tell how much they would lose but considering the fact that they are consistently in contention to be in Grand Slam main draws, the massive financial hit is not difficult to assess. 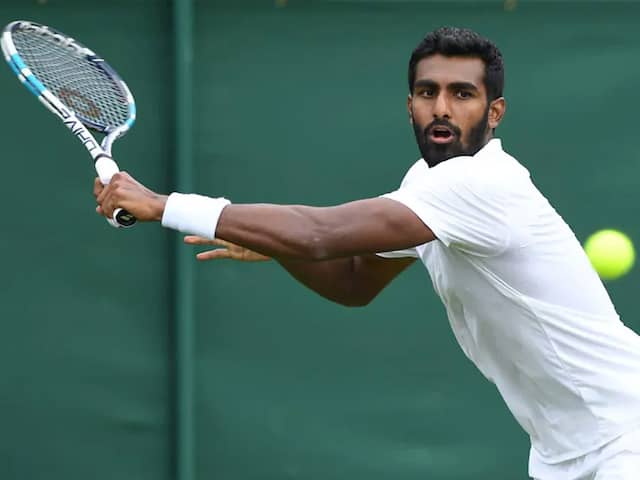 The players feel the national federation now must stand up to offer support.© AFP

India's tennis players -- both current and former -- are not just counting financial losses as they cope with the fallout of the COVID-19 pandemic. What worries them equally is the time lost and a future which is hazy right now. The closure of the Pro Tour means that doubles exponent Purav Raja is set to lose at least USD 50,000 in this lockdown period, according to his own assessment. Prajnesh Gunneswaran, Jeevan Nedunchezhiyan and Divij Sharan can't exactly tell how much they would lose but considering the fact that they are consistently in contention to be in Grand Slam main draws, the massive financial hit is not difficult to assess.

Former Davis Cup captain and one of the greatest Indian tennis players Mahesh Bhupathi says the need of the hour is to "keep the ecosystem alive".

"It has to be kept alive. The players, coaches, markers even ball boys in clubs. Lawn Tennis Association (LTA) and FFT (French Tennis Federation) have announced packages but they have lots of money," Bhupathi told PTI.

This is exactly what Davis Cup coach Zeeshan Ali, Fed Cup captain Vishal Uppal and another India coach Ashutosh Singh are doing. They all run academies and have not stopped the salaries of their respective coaches, taking a hit that runs into lakhs.

There are 3827 certified coaches in India and around 10,000 Assistant coaches. There would be thousands others who are not registered with AITA but attached with at least 2000 academies across the country.

"Your values reflect in crisis. We are tennis servants. We have been associated with the game for so long. Definitely, it's a hit that we are taking but you can't ditch people who have been loyal to you," said Ashutosh, who runs a private academy at DLTA.

Ashutosh has five coaches and has committed to pay their salary without any cut.

Similarly, Zeeshan who runs an academy in Bengaluru with a staff of 12, has been paying salaries to his coaches, "We are not in a industry where we can work from home and earn. We have outstation coaches and we gave them the option to go back if they wanted. We are paying them and hope to continue to pay them but can we afford to pay them indefinitely?," he asked.

Uppal, who has a staff of 14, pays about Rs 4.5 lakh a month in salaries. He says they have not stopped payments but fears once the lockdown is over, parents may not send all the kids back.

"We have to see how many players comeback. Sports is still largely a recreational activity in India. It's not a necessity. They won't stop paying school fee but sports is extra-curricular activity. In case there are job losses, sport will suffer," he warns.

Uppal said the government needs to take some drastic steps to revive tennis and other sports in the country. "There will be economic chaos. The government has to abolish GST on sports and bring it under education. We are also imparting knowledge. There is 18 percent GST on on academies, it's unfair."

"AITA has said it will formulate a plan to support the Indian players. We will all be waiting to hear more about this and hope it can alleviate some of the financial pressure that the players are facing." Prajnesh said no travel means no cost to players but there are other expenditures involved.

"It definitely has financial impact for the players. Especially the ones who have constant expenses for example an annual commitment for coaching etc. Most players outside of 150 in India are spending money and not making money. Since most players in India are outside that ranking, they really aren't spending any more than they did before the lockdown."

"The main downside in my opinion is that players lose time, so one cannot improve and get to a place where tennis helps them earn a living."

Jeevan Nedunchehiyan said the way forward is forming a players' council which works in tandem with AITA.

"With the ATP tour on hold I won't be making any income until we can compete again which is why I think it would be great for the players to step up , create a players' council which works with AITA to better the Indian tour," he said. India's top woman singles player Ankita Raina says AITA's role starts only once some normalcy resumes.

"I think they should start region wise prize money national ranking tournaments. This will be an opportunity for strengthening our national circuit and it will cut down travel, at the same time keep players in match zone.

"Plan for next year to conduct more international level tournaments in India so that Indians are in a position to earn more since travel and other expenses will be lesser in India than abroad," she said.