Del Potro, the 2009 US Open champion and Auckland winner, beat Ferrer 6-4, 6-4 to continue his strong form from the end of last season. 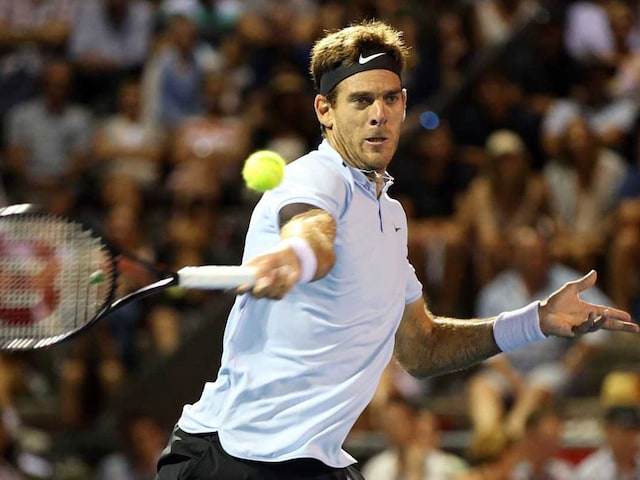 Juan Martin del Potro continued his fine form after he reached his third final in his last four tournaments. He defeated David Ferrer in straight sets to set up an Auckland Classic decider against Robert Bautista Agut on Friday. Del Potro, the 2009 US Open champion and Auckland winner, beat Ferrer 6-4, 6-4 to continue his strong form from the end of last season, which included victory in Stockholm and losing the Basel final to Roger Federer. The Argentine world number 12 now goes into the final against 2016 Auckland champion Bautista Agut, who came from behind in an epic a battle against Dutchman Robin Haase featuring three tie-breaks.

After nearly three hours on court, the classic encounter was settled by a Bautista Agut lob that landed on the line,ending 6-7 (7/9), 7-6 (7/3), 7-6 (7/5). "Unfortunately the match cannot have two winners and I'm so happy I won," said the relieved Spaniard, who sank to his knees at the end. "The end was unbelievable when I saw the ball in I went crazy, I was so happy."

The pair battled for nearly three hours, in a match highlighted by long rallies mixing powerful drives into the corners with cross-court floaters. Every weapon in their armoury was on display, with Haase even switching his racquet from the right to left hand to reach shots swinging away down the backhand side. Del Potro and Ferrer's rallies were generally shorter as they slugged it out from the baseline.

After del Potro raced through the first set, Ferrer held break points when leading 2-1 and 4-3 in the second set as the Argentinian, seeded 12th in the Australian Open next week, struggled with his first serve. But both times Del Potro was able to rely on his running forehand to save himself and at 4-4 he broke the Spaniard before successfully serving for the match.

Comments
Topics mentioned in this article
Juan Martin del Potro David Ferrer Tennis
Get the latest updates on IPL 2020, check out the IPL Schedule for 2020 and Indian Premier League (IPL) Cricket live score . Like us on Facebook or follow us on Twitter for more sports updates. You can also download the NDTV Cricket app for Android or iOS.