Rafael Nadal won his opening round-robin match against Andrey Rublev but defeat against Dominic Thiem meant he faced a shootout against 2019 champion Tsitsipas to reach the semi-finals. 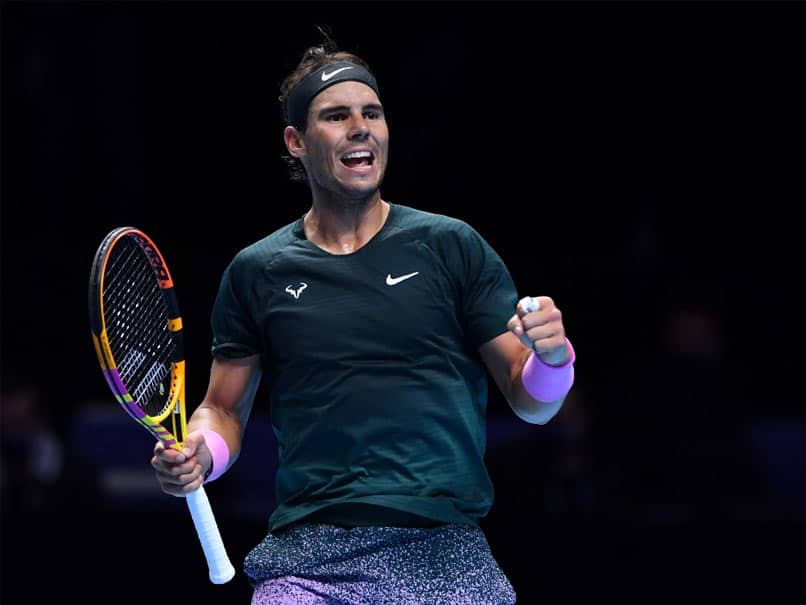 Rafael Nadal kept alive his hopes of a first ATP Finals title on Thursday, beating defending champion Stefanos Tsitsipas 6-4, 4-6, 6-2 in London to qualify for the last four. The Spaniard, whose haul of 86 singles titles includes just one on indoor hard courts, is chasing the biggest prize missing from his resume at the eight-man elite event. The 34-year-old has qualified for the ATP Finals for a record 16 consecutive years but has been forced to withdraw on six occasions. The second seed won his opening round-robin match against Andrey Rublev but defeat against Dominic Thiem meant he faced a shootout against 2019 champion Tsitsipas to reach the semi-finals.

Both players were rock solid on serve until Nadal earned the first two break points of the set in the seventh game, which he failed to convert.

Tsitsipas was again under pressure in his next service game and this time he cracked, double-faulting on break point.

Nadal pressed home his advantage, serving consecutive aces to take the set 6-4 against his 22-year-old opponent.

The Spaniard, twice a finalist at the tournament, had another chance to break in the first game of the second set but the Greek sixth seed dug himself out of danger with a searing backhand.

Tsitsipas did well to cling on against his illustrious opponent who was serving with metronomic efficiency and dominating the longer rallies.

But out of nowhere the Greek earned two set points on Nadal's serve and levelled when the Spaniard double-faulted on the second of those.

The match took a bizarre twist at the start of the decider, with neither player able to hold serve until Nadal finally held to lead 3-1.

An over-hit forehand from Tsitsipas handed Nadal another break and he served out to take the match and set up a semi-final against Daniil Medvedev as he bids to round off the coronavirus-interrupted season in style.

"In general terms a very positive match for me," said Nadal. "To be in the semi-finals here at the last tournament of the year is an important thing. Happy for that and looking forward to the semi-finals against Daniil."

He added: "It's always difficult to play here against the best players of the world every single day, end of the season and most of the time you get here a little bit tired but this year is a little bit different."

The Spaniard last month joined the absent Roger Federer on 20 Grand Slams but his record at the end-of-season tournament pales in comparison with that of the Swiss and Novak Djokovic, who have won the event a combined 11 times.

Earlier on Thursday, Thiem, who had already qualified for the semi-finals, slumped to a 6-2, 7-5 defeat against debutant Rublev in a dead rubber.

"With the fact that I was already qualified in the back of my mind, it was maybe difficult today to keep that intensity alive," said Thiem, who had already clinched top spot in Group London 2020.

The third seed will face the winner of Friday's match between Alexander Zverev and top seed Djokovic in the semi-finals.

The O2 Arena is hosting the event for the 12th and final season before the championships move to Turin.