Austria's Dominic Thiem, who beat Stefanos Tsitsipas and Rafael Nadal earlier in the week to win Group London 2020, was well below his best at London's empty O2 Arena in a 6-2, 7-5 defeat. 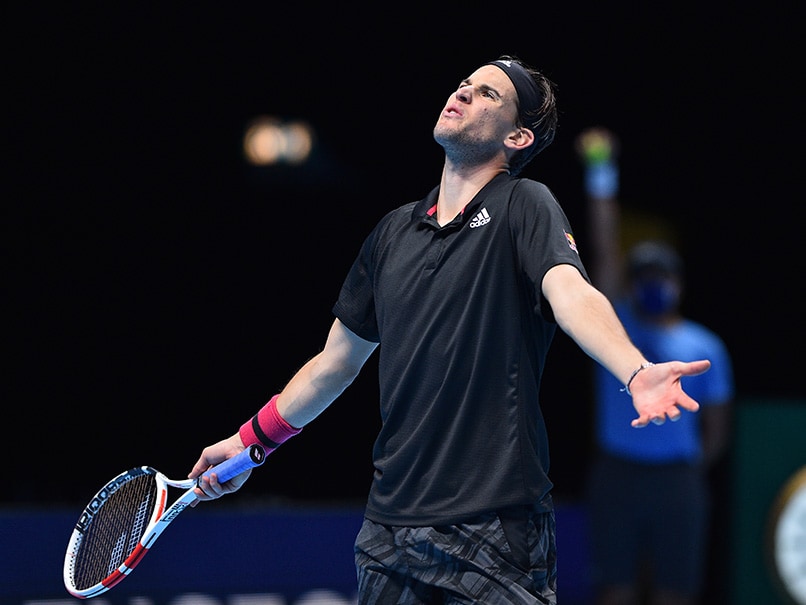 Dominic Thiem slumped to defeat against Andrey Rublev in a dead rubber at the ATP Finals.© AFP

Dominic Thiem slumped to defeat against Andrey Rublev in a dead rubber at the ATP Finals on Thursday, as reigning champion Stefanos Tsitsipas and Rafael Nadal prepared for a shootout to reach the semi-finals. Austria's Thiem, who beat Tsitsipas and Nadal earlier in the week to win Group London 2020, was well below his best at London's empty O2 Arena in a 6-2, 7-5 defeat. Rublev, 23, broke the third seed twice to race into a 3-0 lead at the start of the round-robin match.

Thiem stopped the rot and started holding his serve but could not make inroads into the Russian's serve, and the set was over in just 25 minutes.

US Open champion Thiem, playing significantly below par, tried to dig deep against Rublev, who has had a breakthrough season, winning five titles.

But the Russian, who was in the groove, passed Thiem in the third game to break for the third time in the match and establish an iron grip.

Just when it seemed likely he would canter to victory his level dipped and he dumped a forehand into the net to hand Thiem a break, smashing the ball away in frustration.

At 4-4, the Austrian appeared to be back in the contest but was broken again in the 11th game, sending an angled backhand wide.

Rublev missed an easy overhead as he served for the match but sealed the win with an ace.

"I started really well since the first point, the first return and I think Dominic didn't start that well," said Rublev.

"I took advantage from the beginning and that helped me to have more confidence and helped me to play better and better."

"It was not easy for Dominic but I think he is also focused now already on the semis so I wish him the best of luck. He deserves to be where he is and he deserves to win the title."

French Open champion Nadal, seeking to win the ATP Finals for the first time in his illustrious career, has a 5-1 winning record against Tsitsipas but the Greek will take confidence from last year's win in London.

Daniil Medvedev has already qualified from Group Tokyo 1970 -- 2018 champion Alexander Zverev and top seed Novak Djokovic will battle it out on Friday to join him in the semis.

The O2 Arena is hosting the elite eight-man event for the 12th and final season before the championships move to Turin.

Comments
Topics mentioned in this article
Dominic Thiem Stefanos Tsitsipas Rafael Nadal Daniil Medvedev Tennis
Get the latest updates on IPL Auction 2023 and check out  IPL 2023 and Live Cricket Score. Like us on Facebook or follow us on Twitter for more sports updates. You can also download the NDTV Cricket app for Android or iOS.