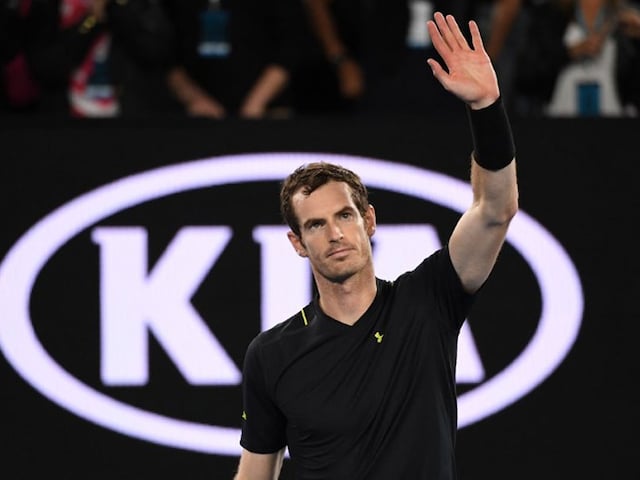 Andy Murray has entered the men's singles third round at the Australian Open.© AFP

Top seed Andy Murray sped into the Australian Open third round on Wednesday but bad boy Nick Kyrgios was booed and accused of not trying as he crashed to a stormy defeat. Roger Federer progressed despite unexpected resistance and women's world number one Angelique Kerber celebrated her 29th birthday with a hard-fought win. Murray painfully rolled an ankle and needed treatment in the third set against Russian qualifier Andrey Rublev, but he shook off the problem to win 6-3, 6-0, 6-2.

Kyrgios, who is returning from a ban for "lack of best efforts" in a match in Shanghai, played lethargically and casually, especially in the fifth set.

"Obviously it's not the greatest thing to hear," he said of the booing. "I didn't have the best preparation coming into the Australian Open. Pretty banged up, my body."

Tennis legend John McEnroe said Kyrgios's lack of effort was a "black eye for the sport". Kyrgios explained that "my body was sore. I was hurting.

Asked how he could have been better prepared, Kyrgios, who hurt his knee playing basketball, said: "I don't know, maybe just not play as much basketball. Actually take my pre-season seriously."

Andy #Murray through to the third round! #AusOpen pic.twitter.com/3h6ETfMwhh

"I know what he's got. I don't need to tell you where he's beaten me," Federer said of Berdych. "Then again I've played him here, played him on many occasions, as well, when it went my way."

Federer wasn't the only leading player challenged in the second round as Kerber, the women's defending champion, dropped a set against world number 89 Carina Witthoeft.

"I was doing I think a lot of mistakes in the important moments. But at the end, I'm happy that I won the match," said the world number one.

In the men's draw, Japanese fifth seed Kei Nishikori marched into the third round alongside former finalist Jo-Wilfried Tsonga, with both winning in straight sets.

Nishikori was extended to five sets in his first-round win over Andrey Kuznetsov, but he found the going a little easier in his 6-3, 6-4, 6-3 victory against Jeremy Chardy.

Nishikori, who believes he is due a first major win this year, next plays Lukas Lacko, with Berdych or Federer waiting in the fourth round.

In the women's draw, 36-year-old Venus Williams continued her smooth progress when she beat qualifier Stefanie Voegele 6-3, 6-2 to set up a meeting with China's Duan Yingying.

Williams, the oldest player in the women's draw, pulled out of the doubles competition with her sister Serena as a precaution to rest a sore elbow.

And Britain's Dan Evans claimed the highest-ranked scalp of his career when he stunned former US Open champion Marin Cilic, the world number seven.

Comments
Topics mentioned in this article
Andy Murray Roger Federer Tennis
Get the latest Cricket news, check out the India cricket schedule, Cricket live score . Like us on Facebook or follow us on Twitter for more sports updates. You can also download the NDTV Cricket app for Android or iOS.