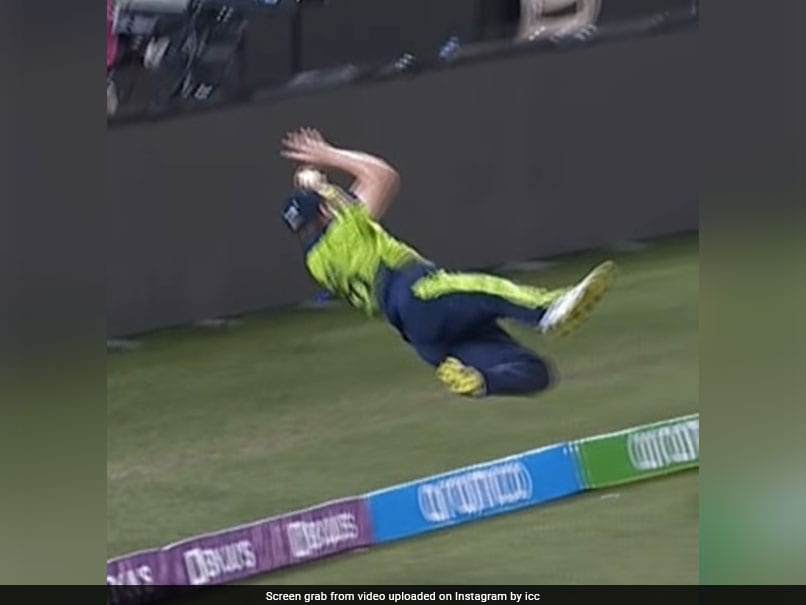 Barry McCarthy came up with a superb fielding effort for Ireland against Australia.© Instagram

Australia are finally showing signs of being a champion team at the 2022 T20 World Cup. Theur got their T20 World Cup defence back on track with a 42-run win over Ireland  at the Gabba in Brisbane on Monday. Ireland, chasing Australia's 179-5, were all out for 137 in the 19th over to put Australia level on five points with leaders New Zealand, who have a game in hand, at the top of Group 1. England, who play New Zealand on Tuesday, are third, two points behind Australia but with a superior net run rate, a factor that could become crucial in a tight group.

Ireland, also on three points, had outside hopes of reaching the semi-finals before the match but they were blown away in the chase by the pace and inswing of Mitchell Starc and then by the scoreboard pressure of their 180-run target. They slumped to 25-5 and handed the World Cup hosts a comfortable win despite a superb unbeaten 71 from Lorcan Tucker.

The match also saw a great fielding effort from Ireland's Barry McCarthy. In the 15th over by Mark Adair,  Marcus Stoinis lofted the high over long-on. It looked like the ball would sail over the ropes but McCarthy made an unbelievable effort as he leapt to push the ball back into play. Even Australia's Matthew Wade appreciated the effort.

Australia captain Aaron Finch, who won the man of the match award for his 63 runs, said scoring had not been straightforward.

"It wasn't the easiest wicket, it was a lot slower than what we expected," Finch said. "They changed their pace really well and bowled a lot of cutters early in the innings. It was hard to get a rhythm and we did well to get 179."

Earlier Finch had stormed back into form with his 44-ball knock which contained five fours and three sixes, answering critics who had called for him to be dropped after a poor run with the bat. Finch denied he had been affected by all the chatter. "Nah, not feeling the pressure at all to be honest," Finch said.

"The support from the change room and support staff has been incredible. T20 is a high risk-game, sometimes it comes off, sometimes it doesn't."

Matthew Wade ICC T20 World Cup 2022 Australia vs Ireland, Super 12 - Match 19 Cricket
Get the latest updates on IPL Auction 2023 and check out  IPL 2023 and Live Cricket Score. Like us on Facebook or follow us on Twitter for more sports updates. You can also download the NDTV Cricket app for Android or iOS.