Watch: KL Rahul Says "Sorry" To Kagiso Rabada Then Apologizes To Umpire For Pulling Out Late In India vs South Africa 2nd Test

In the fifth over of India's first innings, KL Rahul was heard saying "sorry" to Kagiso Rabada before putting his hand up to the umpire. The reason was a late pull out. 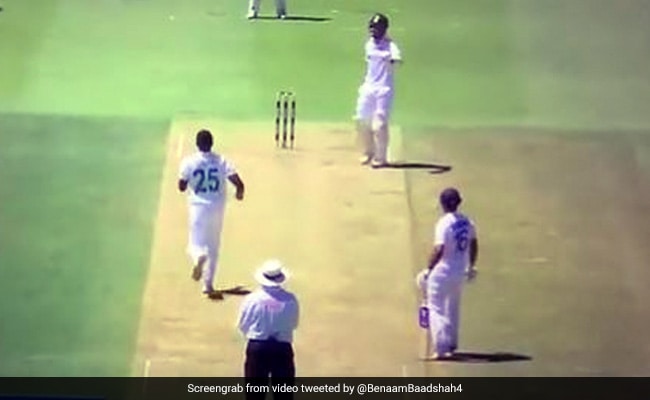 KL Rahul apologized to Kagiso Rabada for pulling out late

KL Rahul is the man of the moment in Indian cricket, quite literally. The Player of the Match of the first Test in South Africa for an outstanding 123-run knock, was named India's captain for the upcoming three-match ODI series against the Proteas in the absence of regular skipper Rohit Sharma. On Monday, Rahul got the honour of leading India in Test cricket for the first time as Virat Kohli was ruled outof the second Test match against South Africa at the Wanderers in Johannesburg with an upper back spasm. That's not all, he remained unbeaten at Lunch on Day 1, surviving testing two two hours of controlled fast bowling by the South African seamers. In between all this, Rahul also showed how polite he can be by apologizing to Kagiso Rabada.

In the fifth over of India's first innings, Rahul was heard saying “sorry” to Rabada before putting his hand up to the umpire. The reason was a late pull out. Rabada was almost in his delivery stride when Rahul walked away. The stand-in Indian captain immediately said “Sorry KG” before turning back and apologizing to the slip cordon.

Rahul also put his hand up to apologise to umpire Marais Erasmus, who was heard saying “Try and be a little quicker please KL.”

Marais is a sweet guy #INDvSA. As is the stand-in captain pic.twitter.com/KVQNqUPt06

After India opted to bat first, Agarwal was more aggressive of the two openers pouncing on every scoring opportunity. The change of bowling finally worked for the Proteas as youngster Marco Jansen, who made his debut in Centurion, had Agarwal out caught behind for 26.

South Africans kept up the aggressive approach as Duanne Olivier removed out-of-form Cheteshwar Pujara for just 3. Extra bounce from Olivier resulted in the ball ballooning towards the point where Temba Bavuma took a regulation catch. In the next delivery, Olivier removed another out of form batter Ajinkya Rahane for a golden duck. Rahane became the 50th Test scalp for pacer Duanne Olivier leaving India tottering at 49 for 3.

India somehow scratched their way to the 50-run mark scoring 52 for 3 in the first session of the opening day in Johannesburg with captain KL Rahul batting on 19 and Hanuma Vihari on 4.