How Indian Pacers Have Thrived Overseas Under Virat Kohli's Captaincy

South Africa vs India: India have never lost a Test match in Johannesburg and Virat Kohli will hope that his pacers can help them maintain that record in the second Test, starting on Monday.

Leading the three-match series 1-0, India will look to clinch their first-ever Test series win in South Africa when both teams take the field for the second Test, starting January 3 at the Wanderers Stadium in Johannesburg. While KL Rahul's ton in the first innings in Centurion provided some much-needed thrust for the struggling Indian batters, the fast bowlers -- Jasprit Bumrah, Mohammed Shami and Mohammed Siraj -- fired on all cylinders, forcing South Africa's batting collapse in both the innings.

India have never lost a Test match in Johannesburg and Virat Kohli will hope that his pacers can help them maintain that record in the second Test, starting on Monday.

India have enjoyed much success in overseas conditions, and stats prove that the Indian bowlers, especially the pacers, deserve a lot of credit for that.

For the record, the Indian pacers have taken 340 Test wickets since 2018 - also the most by any team in the same period.

Moreover, India's pace bowling unit has a strike rate of 51.0 in away matches under Virat Kohli's captaincy - best for a captain who has led one's team in 20 or more Tests.

In the first innings of the Centurion Test, the Indian bowlers took all 10 wickets for a 10th time in an away Test since 2018, which is also a record. 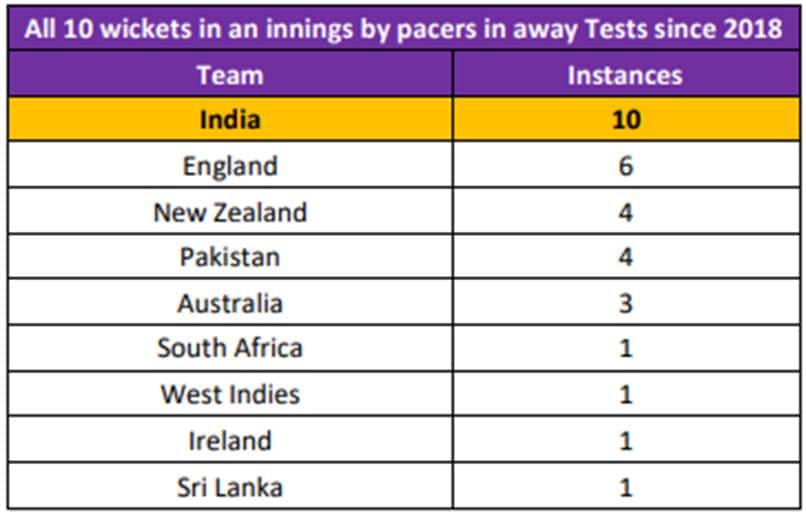 Last but not the least, the last time India played a Test in Johannesburg, all 20 wickets were taken by the pacers.

This was only the second instance when all 20 wickets were taken by pacers in Tests -- the other being the Nottingham Test against England last year -- and both have come under Kohli's captaincy.

Jasprit Bumrah The Wanderers Stadium, Johannesburg South Africa vs India 2021/22 Cricket
Get the latest updates on India vs South Africa and check out  Schedule, Results and Live Score. Like us on Facebook or follow us on Twitter for more sports updates. You can also download the NDTV Cricket app for Android or iOS.