Wriddhiman Saha claimed 10 victims as wicketkeeper in the 1st Test against South Africa to better MS Dhoni's record of 9 scalps in a Test. 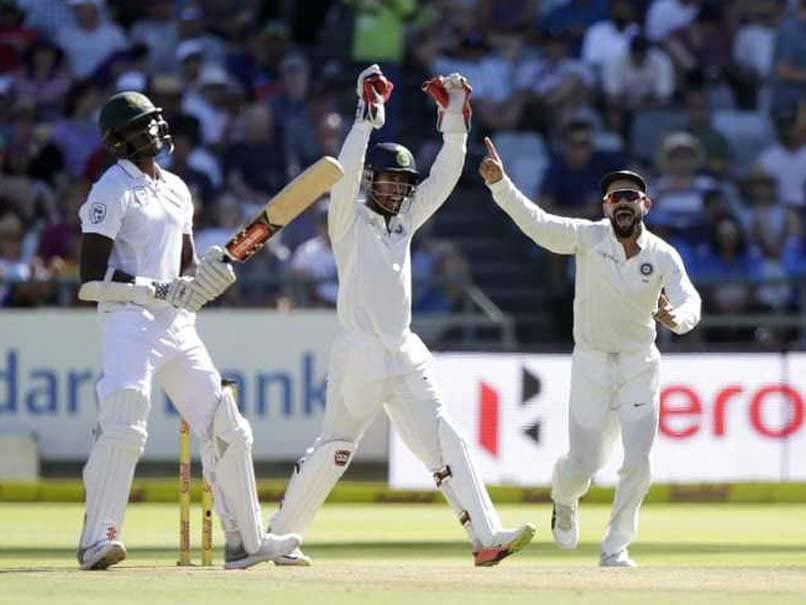 All of Wriddhiman Saha's dismissals came in the form of catches.© AFP

Wriddhiman Saha created history on Monday in the second innings of the first Test match between India and South Africa at Newlands, Cape Town. His catch off Bhuvneshwar Kumar's bowling to get rid of Morne Morkel made him the first Indian wicket-keeper to effect 10 dismissals in a Test, going past the previous best of Mahendra Singh Dhoni, who had the distinction of a record nine dismissals against Australia in Melbourne in 2014.

While all of Saha's dismissals came in the form of catches, Dhoni had one stumping to his credit. Saha also reached a personal milestone of taking five catches in each inning in a Test match for the first time.

Most of the catches were regulation chances for a keeper but the one he took in the first innings to dismiss Kagiso Rabada off the bowling of Ravichandran Ashwin was the best of the lot.

Ashwin bowled it quicker and Rabada went for the cut, got a thick outside edge and Saha held on to it. Not the easiest of catches for a keeper when there is a bit of deviation after the ball goes past the bat but Saha was up to the task.

The Indian wicket-keeper is joint-third in the list along with England's Bob Taylor (vs India, Mumbai 1980) and Australian Adam Gilchrist (vs New Zealand, Hamilton 2000), both whom have taken 10 catches each. Jack Russell of England (vs South Africa, Johannesburg 1995) and AB de Villiers of South Africa (vs Pakistan, Johannesburg 2013) are at the top of the table by effecting 11 dismissals to their name, all of which came in the form of catches.

The 33-year-old has played 32 Tests for India and has taken 75 catches so far in his career. To add to that, Saha has effected 10 stumpings as well.

Comments
Topics mentioned in this article
India Cricket Team South Africa Cricket Team Wriddhiman Saha MS Dhoni Newlands, Cape Town Cricket South Africa vs India 2018
Get the latest updates on ICC T20 Worldcup 2022 and CWG 2022 check out the Schedule, Live Score and Medals Tally. Like us on Facebook or follow us on Twitter for more sports updates. You can also download the NDTV Cricket app for Android or iOS.