Watch: Indian Bowlers Sweat It Out Ahead Of First Test Against South Africa

India and South Africa will face off in the first of three Tests in Cape Town from January 5. 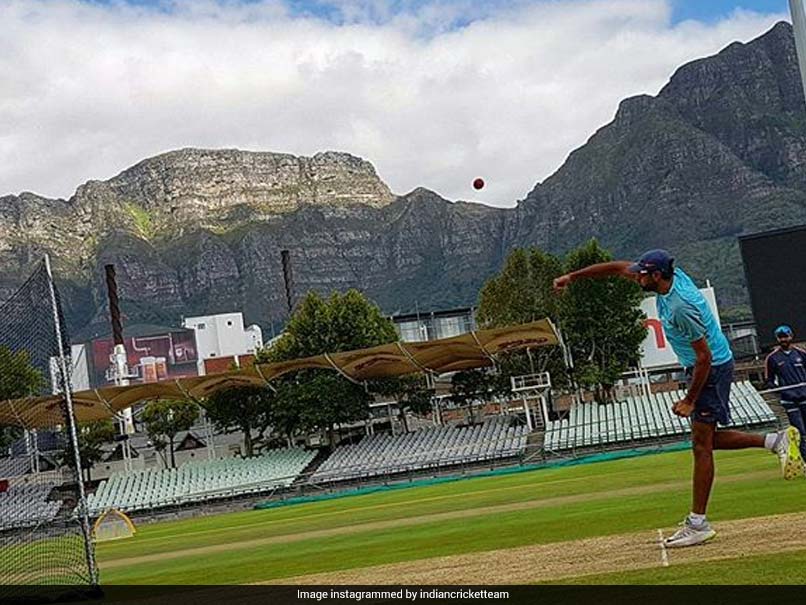 Even as the series between South Africa and Indiaapproaches, several experts have felt that this Indian team may be able to stop the Proteas and the belief is that the Virat Kohli-led team will create history by winning the series for the first time in their backyard. The Board of Control for Cricket in India (BCCI) shared a video of Team India's practice session on Tuesday where the bowlers were seen sweating out hard in the nets. The video was captioned as " Nice little rhythm the bowlers are getting into at the moment #TeamIndia #SAvIND." India's fate will depend a lot on the fast bowlers comprising of Mohammed Shami, Umesh Yadav, Bhuvneshwar Kumar, Ishant Sharma, Jasprit Bumrah and Hardik Pandya. While the spinners-- R Ashwin and Ravindra Jadeja are most likely to play the support role.

Nice little rhythm the bowlers are getting into at the moment #TeamIndia #SAvIND pic.twitter.com/QNVz9v6cP3

Earlier, Jasprit Bumrah had spoken about his journey from while ball to the red ball and also shed some light on India's practice session. "I have been with the team in the ODI set-up but being a part of the Test team is a good feeling. I have a lot to learn from the senior bowlers and the bowling coach as well," Bumrah had said.

Bhuvneshwar also spoke about the different challenges in South Africa.

"The first thing that comes to the mind when you are touring South Africa is bouncy wickets. But that is no surety of what kind of pitch you would get in the game," he said in a media interaction.

The swing specialist said the pace attack has not yet gotten down to strategising for the game and the focus is on bowling long spells.

"We have not talked so far about the strategy. The focus is on the basics. Maybe a couple of days before the first Test, we will see how to strategise according to the batsman."

The Indian cricket team has played 17 Tests against South Africa in their backyard and managed to win only two and losing on eight occasions, while seven ended in draws.

Comments
Topics mentioned in this article
India Cricket Team South Africa Cricket Team Virat Kohli Bhuvneshwar Kumar Mohammed Shami Jasprit Bumrah South Africa vs India 2018 Newlands, Cape Town Cricket
Get the latest updates on ICC T20 Worldcup 2022 and CWG 2022 check out the Schedule, Live Score and Medals Tally. Like us on Facebook or follow us on Twitter for more sports updates. You can also download the NDTV Cricket app for Android or iOS.