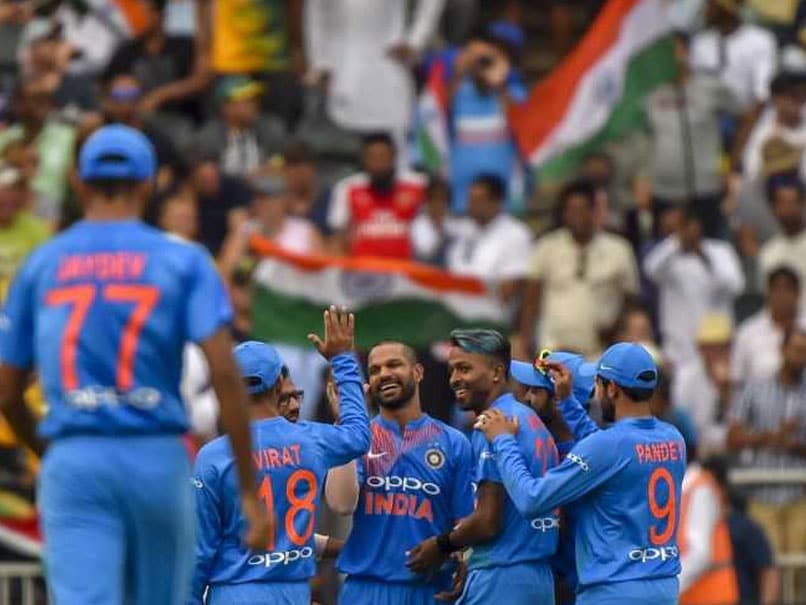 India took a 1-0 lead in the 3-match T20I series with a win in Johannesburg.© AFP

Shikhar Dhawan's fiery 72 off 39 balls was the difference in the end as India beat South Africa by 28 runs in the opening Twenty20 international at the New Wanderers Stadium in Johannesburg on Sunday. India, who had won the ODI series 5-1, have now drawn first blood in the T20 series and will look to wrap things up at Centurion on Wednesday. In the end it was a comprehensive win for India, who posted 203 for five after being put into bat. South Africa after a slow start were always chasing shadows and the target proved beyond their reach courtesy some splendid bowling from Bhuvneshwar Kumar, who ended with career best T20I figures of 5/24.

South Africa's chase never really got going despite JJ Smuts (14) and Reeza Hendricks finding the boundary in the first two overs. Bhuvneshwar got Smuts with a knuckle ball and from thereon in it was all India.

Proteas captain JP Duminy (3) just couldn't find the middle of the bat and his sluggish stay was brought to an end by Bhuvneshwar.

David Miller (9) was sent packing by Hardik Pandya for nine as India took complete control of the match. Hendricks and Farhaan Behardien steadied South Africa but the run-rate kept climbing, especially with the hosts fearful of losing more wickets.

Hendricks and Behardien notched up a 81-run partnership for the fourth wicket to keep South Africa in the hunt. But with the run-rate climbing steeply, both batsmen decided to up the ante.

Behardien did manage to clear the boundary a couple of times but was dismissed by Yuzvendra Chahal. Hendricks, who notched up his maiden T20I half-century, too fell trying to find the boundary.

Needing 65 off the final four overs, South Africa lost wickets in heaps with India even managing to get a team hat-trick.

Earlier, India, put into bat, got off to an absolute rollicking start with Rohit Sharma clearing the boundary at will. Rohit hit two sixes and as many fours, smashing 21 off just nine balls.

Rohit's joy, however, was shortlived as he became Junior Dala's first international wicket. Dhawan was in no mood of letting up and carried on the onslaught accompanied by captain Virat Kohli.

Suresh Raina making his comeback to the Indian fold, smashed some lusty blows before being sent packing by Junior Dala for 15.

While Dhawan was tearing apart the South African bowling, Kohli hit some trademark drives to signal his intent.

Kohli, who has been in some scintillating form in South Africa, got a reprieve with Farhan Behardien dropping him at long-on when batting on 10. However, Kohli, for a change, failed to cash in and was dismissed by Tabraiz Shamsi for 26.

There was no stopping Dhawan, though, as he kept peppering the fence as India motored towards a big score. The left-hander brought about his fourth T20I half-century with the South African bowlers running out of ideas.

Dhawan was joined by Manish Pandey, who looked a bit out of sorts and the onus fell on the former to keep the run-rate going.

Dhawan consistently chanced his arm but finally ran out of luck when he was caught by wicket-keeper Heinrich Klaasen off the bowling of Andile Phehlukwayo, attempting to play an ambitious scoop.

After Dhawan's fall, India lost some steam with Pandey and MS Dhoni unable to find the boundary at the same regularity as before.

In the end, it took couple of lusty blows from Hardik Pandya as India crossed to the 200-run mark.

Comments
Topics mentioned in this article
India Cricket Team South Africa Cricket Team Shikhar Dhawan Bhuvneshwar Kumar South Africa vs India 2018 Cricket
Get the latest updates on ICC T20 Worldcup 2022, check out the Schedule and Live Score. Like us on Facebook or follow us on Twitter for more sports updates. You can also download the NDTV Cricket app for Android or iOS.