Manu Bhaker and Saurabh Chaudhary had bagged gold medals at the World Cup in New Delhi and Beijing earlier this year. 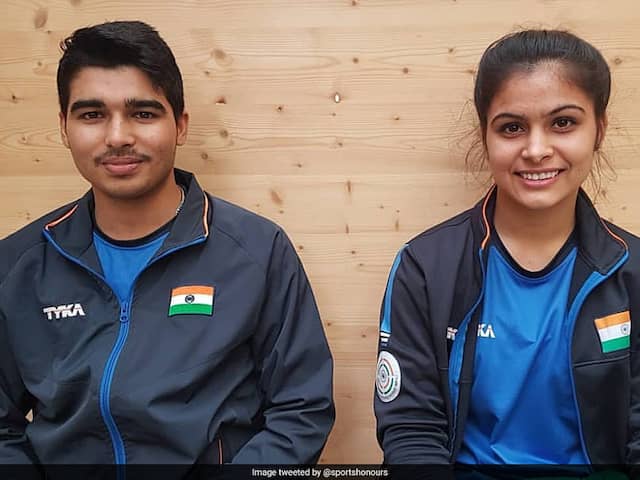 Manu Bhaker and Saurabh Chaudhrary continued their dominating run in the 10m Air Pistol mixed team event to clinch a gold medal at the ISSF World Cup 2019 in Munich on Thursday, completing a hat-trick of top podium finishes at the World Cup. Manu Bhaker and Saurabh Chaudhary, the sensational Indian duo, kept their nerves to defeat the Ukraine's Olena Kostevych and Oleh Omelchuk 17-9 to take the summit podium spot. The result also inspired India to finish top of medal standings with five gold and one silver to their name above China.

Manu Bhaker and Saurabh Chaudhary had bagged gold medals at the World Cup in New Delhi and Beijing earlier this year.

Bhaker secured India its seventh Olympic quota in shooting with a fourth-place finish in the women's 10m air pistol event of the ISSF World Cup in Munich on Wednesday, putting behind the disappointment of pistol malfunction in her earlier event. While a score of 201.0 in the final got India a quota for the 2020 Tokyo Games, the 17-year-old Bhaker missed out on a medal by the narrowest of margins, trailing reigning Olympic and world champion Anna Korakaki of Greece by a mere 0.1 point at that stage.

Saurabh Chaudhary had earlier made the country proud by clinching a gold in the 10 metre Air Pistol category. The teenage broke his own world record of 245 by shooting 246.3 points in the final to take the summit standings.