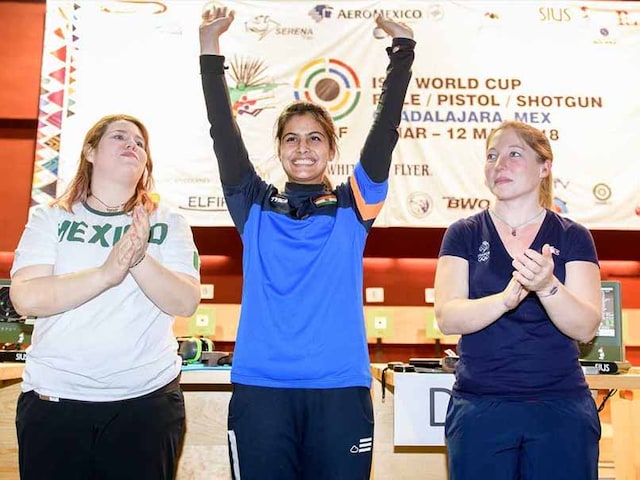 One day she lived up to the expectations only to far exceed them the next but winning two gold medals in as many days on a World Cup debut is "beyond belief" for even a storehouse of talent like Manu Bhaker. The shooting sensation, all of 16, shot her way to a second successive gold medal in a mixed team pistol event as India maintained their spectacular stranglehold on the season's first ISSF World Cup in Guadalajara, Mexico. "This is unbelievable, I never thought that I would end up winning two gold medals in a senior World Cup," Bhaker told PTI after she teamed up with Om Prakash Mitharval to clinch the 10m air pistol mixed team title.

This was a day after she signalled her arrival on the world stage with a bang -- an individual gold medal in the women's 10m air pistol.

For someone who took to shooting just a little over two years ago, winning two gold medals in a global event of this magnitude would easily qualify as some achievement.

"I was a little nervous in the individual event. I shot 8.4 in the 17th shot yesterday and an 8.1 in the 19th, so I was not very comfortable but then managed to recover well," Bhaker said.

She sealed the issue in her favour by shooting 10.6 in the final shot, even as the others stumbled.

Shooting happened to her by chance after a brush with contact sports (boxing, martial arts) and Bhaker has more than stamped her class in the tournaments she competed in.

The unassuming pistol shooter from Jhajjar, Haryana, is now focussed on the ISSF Junior World Cup in Sydney followed by the Gold Coast Commonwealth Games next month.

"I am obviously delighted with the way my maiden outing in a senior world cup panned out, and I am now looking forward to the upcoming events. As always, I will look to give my best shot and win medals for my country," she said.

Thanks to her memorable outing in Mexico, the 11th standard student has become one of the youngest ever to win a senior World Cup gold medals for India.

She won a staggering 15 medals, including nine gold, during the tournament.

Bhaker's tryst with shooting began when her father took her to the range and asked her to try her hand at the sport.

She fired a few shots that found the centre of the target and there was no looking back.