Even before he left for his fifth and final Olympic Games in Rio, Abhinav Bindra had announced that he would hang up his gun after the event. But it was not until Sunday afternoon that his 'retired' status became official. The National Rifle Association of India gave him a fitting farewell. For now, the rifle ace has decided to stay away from the sport. 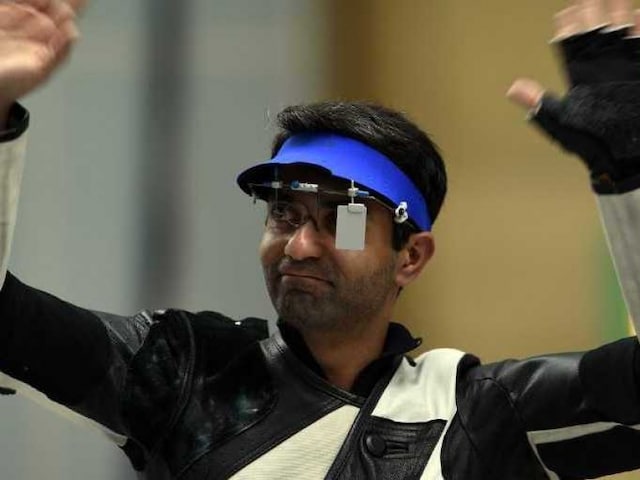 Abhinav Bindra used the elements of eloquence, "stuck to his guns, literally and figuratively," to charm a crowd of hundred plus shooting exponents, aficionados and journalists on Sunday afternoon.

The occasion was the Beijing Olympic gold medallist's farewell party by the National Rifle Association of India (NRAI), where he spoke about the closure he got from his 4th place finish at the Rio Olympics. "It has been an emotional journey for me and it's a fulfilling closure for me. It's time to move on and hand over the baton to the young generation."

"At Rio, I finished fourth in the men's 10m air rifle event and couldn't get a medal. I had given it all at the Rio shooting range. I have always believed in a process driven approach and that's what I did in Rio. I have nothing more to deliver at the range as I hang up my boots," said the 33 year old in his parting speech.

Bindra began his Olympic journey in Sydney in 2000. He was eighteen then, and the youngest member of the contingent. Sixteen years later, with one Olympic gold medal (having missed two narrowly, in Athens and in Rio), one World Championship gold and several others in his kitty, Bindra has decided that he has had enough...enough of pushing his body to the limits... enough of striving to be a world beater.

"My talent lies in working hard and pushing myself to the limit. I have always given preference to hard work and dedication because that is what gives you the ultimate satisfaction," he stated.

And the lessons he takes away from the sport are, "perseverance, hard work and doing things with the heart and soul."

Unlike in the case of Lionel Messi, there were no fans waiting outside the range with placards saying "Come back Bindra", because shooting, unlike cricket, has not percolated into every strata of the Indian society.

Abhinav's gold, Gagan's bronze have made changes to the Indian shooting landscape, but only slightly. Now a retired athlete, how does Abhinav plan to spread the sport? "It is not my problem, it's for the Federation to look at it," says a detached voice.

After making his gun talk forover two decades, and an eloquent talk at his retirement party, Abhinav Bindra has announced that he's 'taking a sabbatical from sports, neither interested in being a coach or an administrator.' He isn't serious about leaving the sport, or is he?

Comments
Topics mentioned in this article
Shooting Abhinav Bindra
Get the latest Cricket news, check out the India cricket schedule, Cricket live score . Like us on Facebook or follow us on Twitter for more sports updates. You can also download the NDTV Cricket app for Android or iOS.