Reigning champion Sofuoglu of Mahi Racing team lost the front at turn 8 during the 4th lap of the race, while he was in the lead. 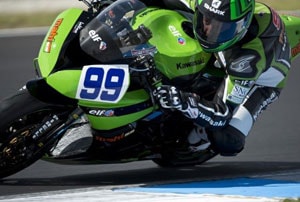 Bad weather has dashed Mahi Racing team's hopes of a securing a good finish as its two riders, Kenan Sofuoglu and Fabien Foret, crashed out in Monza, Italy.

The race was marred by rain and crashes on the track on Sunday. (Note: Adjoining is a file photo)

Reigning champion Sofuoglu of Mahi Racing team lost the front at turn 8 during the 4th lap of the race, while he was in the lead.

Teammate Foret didn't take part in the race after being involved in a crash at turn 1 that brought out a third red flag - which eventually led to the decision to postpone the race. Foret has undergone medical check-up.

Kenan was leading the race when rain first hit the riders resulting in conditions barely fit for racing. This was the first time that three red flags were shown during a WSS race in three interruptions due to bad weather and oil spill.

Arun Pandey, chairman & managing director, Mahi Racing team said, "We were leading until the rain played spoil sport and it is really unfortunate that both our riders got involved in crashes and had to bow out."

The race was won under dramatic circumstances by Sam Louis of Yakhnich Motorsport Yamaha.

Comments
Topics mentioned in this article
MS Dhoni Imola Other Sports
Get the latest updates on ICC T20 Worldcup 2022 and CWG 2022 check out the Schedule, Live Score and Medals Tally. Like us on Facebook or follow us on Twitter for more sports updates. You can also download the NDTV Cricket app for Android or iOS.